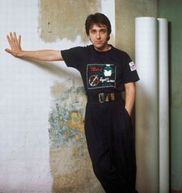 
Of all the arts, music is by its nature the most liberated from a narrative purpose.  If a story is built into a piece of music, then most likely words had to carry it, perhaps even theater, moving pictures.  Music is more like an emotion before it is described, a train ride where you are left to dream on your own.

Sergey Kuryokhin, in Popular Zoological Elements, knows these qualities of music.  It is a tribute to his own particular soulfulness, as well as to his virtuosity, that he can wield such a range of metamorphoses on the piano.  At times his playing is like a fantastic voyage through an ice palace where a trace of the year has melted, and at once you have refractions of Slavic folk tunes bending round into blues, rags, and free improvisation, then revealing itself as a cousin of French impressionism or the closing movement of a concerto.  The changes from one imagined landscape to another happen so naturally, suddenly you are already there in this new place, that one is not confused, merely riding along and delighting how everything may be related.  At the end of the title piece, waters lap the moonlit shore till the music dashes off its knickers and kicks out a closing refrain, followed by the Laughing Man and the animal world in the guise of toys producing those sounds.

Kuryokhin is a man of many tastes.  It has been five years since his last album of solo piano and he has been up to much else in the meantime.  His orchestra Popular Mechanics was conceived to realize his intentions of “bringing everything together,” and it made him famous at home and in the West.  Still, like Boris Grebenshchikov in whose rock group Aquarium he worked as the keyboardist, Kuryokhin’s official status hardly reflects his popular approval (or it does in reverse proportion); this is not unlike most other countries in the end.

Subway Culture, subtitled “The Third Russian Opera,” shows a more subdued, even somber side of Kuryokhin.  Curiously, it is co-composer Grebenshchikov who comes off as the avant-gardist here, with his own animistic distortions that he pulls out of his guitar, sometimes playing it with a razor blade.  You might almost think you’re in church with Kuryokhin’s organ but it rumbles in your guts:  the phantoms have been let loose and they have their own long histories to tell.  Inside the album cover, there is a text that recounts an “ancient” saga in four acts and the begetting of the First Russian Subway.  The music might seem to illustrate the tale, both laced with a sharp current of humor and the surreal.  But it is the journey that stays with you rather than the words.