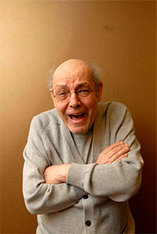 written in Fall 2006 for Shuffle Boil (Berkeley) 7/8, but the journal ceased publication


The extra features alone would have sufficed to make this an invaluable disc.  Starting with Pief, Misha Mengelberg’s short 1967 film of a cat walking up and down the keys of a piano, these eight pieces demonstrate the deep and playful spirit that marks his musical approach.  Five years later, there is Eeko, Mengelberg’s incredible blues improvisation in duet with his parrot as soundtrack to a glimpse of Dutch street scenes.  Or, from the past few years, the full set of Met welbeleefde groet van de kameel (With Sincerest Regards from the Camel), with guest artist Anthony Braxton, his fierce intermittent honking over the circus-like arrangement of the ICP Orchestra, while a two-man construction crew wheels onstage to saw apart a wooden chair and reconstruct it into the shape of a camel.  There is also an improvisation performed by Mengelberg in duo with longtime collaborator Han Bennink; plus two pieces in duo with Dave Douglas; and two more of the ICP Orchestra, in one of them playing Hoagy Carmichael’s “Baltimore Oriole.”

But these are all appetizers, or desserts, or delicious and delirious sideshows to the main event.  An affectionate tribute, a fittingly complex portrait of a unique and contrarian figure, Afijn is built from interviews with longtime friends and collaborators, and Mengelberg himself, in addition to extensive footage from concerts, rehearsals, tours, and historical archives.  Says composer Louis Andriessen:  “What is happening in the Netherlands now, in ensemble and improvised music, is unthinkable without Misha.”  One of Mengelberg’s early compositions, blending improvisation with his inimitable sense of the theatrical and the absurd, “Music for Two Pianos” (1965), shows Andriessen as the second pianist seated in a sawed-off chair on the floor playing the piano from underneath.  From the start, though his father was a music critic and his mother a classical harpist (biographical details are kept to a minimum in the film), Mengelberg’s subversions of the conservatory sought outlet in jazz and indeed his early heroes included Ellington, Monk, Herbie Nichols:  we see his trio with Han Bennink in 1960 playing Monk at a club in Utrecht.  Central to the focus of the film is that unpredictable zone where the composed and the improvised meet; its greatest expression for him has been the Instant Composers Pool, originally founded by Mengelberg, Bennink, and Willem Breuker in the late 1960s, and still active as a working ensemble in its present 10-piece format.  Mengelberg writes most of the music for the band (aside from their rollicking covers of Ellington, Monk, Nichols), and his approach seems rather to unify the diverse paths of his musical formation.  As he says, “I listen to Beethoven exactly the same way I listen to the ICP.  With the same ears.”  The group’s energy, resourcefulness, and humor are amply demonstrated here, and some of his regular collaborators attest to the effect he has on the music.  But perhaps his influence is best described by another composer, Guus Janssen, who says of Mengelberg:  “He opens up a window in your mind.”
_