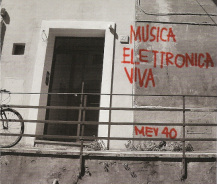 
To sculpt a sound, even to unleash a hatful of sounds, is to set the mind afloat like a boat onto water.  Music, however it may be identified, leads or follows the willing dreamer, though the open adventure offers no assurances except in the promise, eventually, of silence.  The events that unfold in the meantime exercise our capacities as listeners and create their own time, while we in turn, at once engaged and forgetful, cannot entirely shake off that newfound luminescence.

Among the most provocative, undefinable, and surely utopian ensembles, Musica Elettronica Viva has survived so long partly due to its near-clandestine existence, reconvening only occasionally, but above all because of a shared outlook.  Participants in the manufacture of wonder, the core members of MEV---Alvin Curran, Frederic Rzewski, Richard Teitelbaum---practice a radical democracy, and an essential playfulness, with regard to what sound materials might be used for musical purposes.  Educated at elite American music schools in the early 1960s, each went off to Italy for further study; with other expatriates in Rome, they founded MEV in 1966.  Ever variable in size, the collective sought to challenge reigning orthodoxies and pose alternatives for organizing sound, influenced by Cage and Feldman, as well as contemporaries in the Fluxus movement and the free jazz scene.  And yet, despite their substantial oeuvre individually as composers, after all these years it is easy to imagine the group might still be too much in some quarters:  Mass. Pike, the final piece on the 4-CD retrospective MEV 40, from the Tanglewood contemporary music festival in 2007, left much of its audience perplexed---by its wayward references, its collage aesthetic, its intuitive form.

From the start, MEV pioneered the use of live electronics alongside traditional instruments and assorted contraptions, freely improvising with no predetermined plan.  The work, the musical product, was completely a matter of performance:  their first big piece, Spacecraft, was produced throughout Western Europe in the fall of 1967, and the Berlin version heard here differs markedly in its breathing---shorter, more intense---from the Cologne version on the Alga Marghen release.  Perhaps their most abstract piece, even known instruments (tenor sax, voice, trumpet) are made strange, and with Rzewski’s amplified glass plate, Curran’s artfully rigged contact mikes, Teitelbaum’s early Moog synthesizer triggered partly by brain waves, the musical experience was more like a happening.  Of course, some in the audience were perplexed back then, too.

The late ‘60s was MEV’s most active period, since they were all living in Rome---including another frequent member, soprano saxophonist Steve Lacy, who is heard on well over half the music in this box.  The ensemble continued briefly in New York during the early ‘70s, when trombonist Garrett List also became a regular member, but Curran went back to Rome and Rzewski eventually to Belgium, so MEV became the net that pulled them together again when opportunities arose.  As these seven concerts will attest, each occasion also served as a fleeting laboratory for current ideas, themes, acquisitions, topical commentary (Rzewski on piano quoting “When Johnny Comes Marching Home” and “Taps” in Stop the War, 1972, and in Mass. Pike).

With their music of friendly anarchy, constantly unpredictable, the imaginative space in the work seems to expand through the decades, the textures and delicate juxtapositions more complex; this owes both to evolving perspectives and technologies (synthesizers, sampling, and their uses).  Sometimes when Lacy was present, the group would coalesce almost like a jazz band around his knotty tunes, which would suddenly rise to the surface for a while, as in the second set of the 1982 Amsterdam concert.  Likewise, the 2002 Ferrara performance (a sextet with George Lewis) includes an intermittent Lacy medley---it was to be his last appearance with MEV---but most remarkable, following in the wake of List’s fractured vocal delivery of “You Are My Sunshine” late in the set, is Lacy’s moving duet with Curran blowing the shofar for a couple of minutes, before they all launch forth into Lacy’s “Deadline.”

But the most enduring image of MEV came to me when I saw the group perform at Montclair State University in New Jersey, in 2005, much as in the photo of the subsequent Tanglewood concert.  There, on the big stage, the three core members sat bent over their consoles and keyboards:  three mystic rabbis rattling the keys, conjuring their magic gardens, their clouds of gnosis and unknowingness.