A record company to accommodate all our moods and tastes, all the people we are, Le Chant du Monde is a worldly harbor of the heart.  Far and away the most important label of world music, they have for fifty years been demonstrating the power of music in their ever ranging, ever keen catalogue.  From ethnic and traditional music to popular song, from transcultural pioneers to the special series featuring different instruments, as well as in their classical list, Le Chant du Monde is a highly valuable force in the crossing of cultural borders.

Their biggest collection is in what the French call variétés, popular song mostly, plus show tunes and other occasional music.  Among recent releases, Carlos d’Alessio’s exquisite record of music composed for Marguerite Duras’s films, Indian Song (LDX 74818), has created the biggest stir.  Long awaited, since the film of the same title ten years ago, the record nearly sold out in its initial run the first day.  D’Alessio’s music is an aromatic blend of cultures and continents that recalls some forgotten voyage, a lost joy left out of the catalogues of our memory, precisely because it is unidentifiable.  His is a thoroughly international sound.  An Argentine who spent the 1960s in New York experimenting with tape recorders, doing happenings, and weathering a gracefully brief stint in commercial music, d’Alessio has spent the 1970s and since in Paris, where he soon became known as Duras’s composer and also for his theater music, frequently with the Groupe Tse.  Le Chant du Monde has also just put a record of d’Alessio’s theater music, Luxe (LDX 74852), which includes the reissue of work from the Groupe Tse’s piece of the same name. 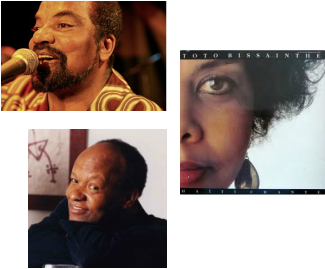 The company is faithful to its name—the song of the world—especially in its list of popular song artists.  Among the most exciting of these is the Angolan singer Bonga and Haitian actress and singer Toto Bissainthe.  An effervescent full-hipped swing carries Bonga’s tunes, as on the recent Sentimento (LDX 74843), with his splashing harmonica style highlighting the dance.  On Toto Bissainthe’s Haïti Chanté (LDX 74799), Haiti is brought to us in a repertoire of new and traditional songs alive with the bewitching rhythms and melodies of that island universe; in her 45 rpm single for the company’s splendid series of lullabies from around the world, her Haitian children’s songs are almost scary they’re so attractive.  From Martinique, painter and percussionist Henri Guédon has recorded several records of original Antillaise music for Le Chant du Monde, including his latest, the bouncing yet sophisticated Afro Temple (LDX 74815).  The company has also put out many records of important South American artists, including the Argentine guitarist and singer Atahualpa Yupanqui, the flautist Una Ramos, who plays the quena and panpipes of his native Andes, and the Chilean mother of the New Song movement in that continent, Violeta Parra.  And all around the Mediterranean singers have recorded with the company, from Lluis Llach in Catalan Spain, Giovanna Marini in Italy, and Theodorakis in Greece, to Cheik Imam in Egypt and across the rest of North Africa.  Domestically, the company’s variétés artists are also ethnically diverse, from the Occitan singer Claude Marti to the African-mixed group Zaka Percussion, besides the classic French cafe-theater song from as far back as Arletty’s old recordings.  For the young guitarist Pierre Bensusan, cultural pluralism is the very fabric of his music; his album Compilations (LDX 74808) breathes Celtic, Flemish, and Turkish influences, plus a few, floating through unknown places. 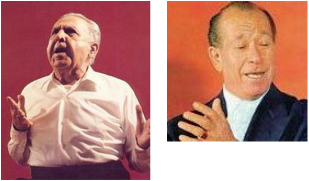 A new series initiated by the label is devoted to the masters of flamenco, and the first two records so far (reissues of long out-of-print material), by Pepe de la Matrona (LDX 74829) and El Niño de Almadén (LDX 74830), are each an absolute knockout.  No debate on the meaning of duende or cante jondo (deep song) is needed after listening to these records.  These men definitely have the spirit.  The company’s goal with this collection, which will eventually include fifteen to twenty titles, is to offer for the first time out of Spain recordings by the music’s purest practitioners, each album dedicated to a single artist.  Several other flamenco records were already in the company’s collection, as part of other series, mostly with the excellent guitarist Pedro Soler, who accompanies the above artists and has made two fine solo albums.
Le Chant du Monde has long been directly interested in music at its sources.  Over a dozen albums of field recordings the world over have been co-produced by the company, in collaboration with the Centre National de la Recherche Scientifique and the Musée de l’Homme, while their series of French traditional music has half a dozen titles.  Through their interest in contemporary performers of traditional music, they also developed a special collection of records focusing on individual instruments.  French, Celtic, American north and south, as well as African percussion instruments are featured, and some jazz records once were too, with Steve Lacy’s album Points, showing the finest soprano saxophonist at work, and Kent Carter exploring the bass on It Will Come, but both are now out of print.

The company’s other largest collection is in classical music, with special attention to Russian composers and interpreters.  As the exclusive representative in France of Soviet recordings, they have put out most of Shostakovitch’s work, as well as that of Khatchaturian and Prokofiev, in addition to the great Russian operas and ballets.  They have also recently issued a ten-record anthology of the instruments and voices of the people of the USSR, as well as a series of works by lesser-known Russian composers.  The company has specialized too in the work of contemporary French composers, from Milhaud and Poulenc to the first record by Xenakis and beyond.

One could complain that Le Chant du Monde doesn’t cover certain areas of the world sufficiently, or that they don’t pay enough attention to improvised music perhaps.  But what they do put out, much that any other label wouldn’t know how to find room for, enriches us immeasurably.  And how lucky we feel to learn that there is more, ever more music in the world.