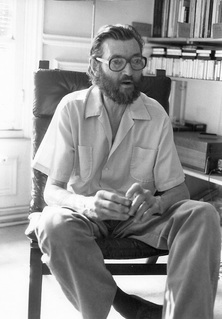 
In May 1982, the Argentine writer Julio Cortázar and his third wife, Carol Dunlop, set out on a curious expedition.  With their trusty VW camper van, dubbed Fafner after Wagner’s dragon, they intended to discover the other thruway, the parallel path hidden in plain sight, along the autoroute from Paris to Marseilles.  The better to gain access to that imagined place, the couple established some rules:  they would not once leave the highway; they would explore each rest stop, two per day, spending the night there; they would take detailed notes on their findings; and, like Marco Polo, they would write a book on their journey as they went.

Normally a full day’s trip, with sixty-five rest stops (some idyllic, some inhospitable) they passed an entire month on their voyage.  By traveling at a medieval pace—driving between stops took barely ten minutes—they entered a different rhythm from which to view the life teeming around them, outside the ordinary time of headlong destinations.  Their plan, in its faithful execution, resembled Cortázar’s own notion of the fantastic that informed his many stories, as a realm accessible at any moment under the right conditions.  Such was the ephemeral city that formed anew each night, at the larger rest areas among truckers from far and wide.

The book—first published in 1983 and the last in his lifetime, now available in a fluid and felicitous English translation by Anne McLean—figures among Cortázar’s most playful works, its tone recalling in a lighter vein the travelers’ tales from the age of discovery.  At the same time, it offers another take on the collage esthetic that underlay his novels and kaleidoscopic multigenre books like Around the Day in Eighty Worlds.  After an extended preamble introducing the protagonists of the expedition, its genesis and preparations, the record of the voyage comprises a daily travel log, many photos, hand-drawn maps of the rest areas, and a wealth of texts that illustrate a variegated present.  Cortázar and Dunlop’s commentaries dwell on physical surroundings, metaphysical speculations, encounters with truckdrivers and highway workers and other travelers, as well as observations of each other’s habits; the authors remark, too, on how their enchanted state has changed them, even sharpening the details in their dreams.

Yet, at every turn the space of fiction opens new perspectives, as in the intermittent reappearance of the absurdist freeloaders Calac and Polanco (from Cortázar’s 1968 novel 62: A Model Kit), who somehow find the couple at multiple rest stops.  There is also the series of letters from a mother to her son in Canada, noting how she keeps running across that couple with the van at different rest areas along the freeway, over the course of several weeks:  guessing the nature of their improbable existence, she concludes that “they look a bit happier than normal people.”  And of course the brave dragon itself, Fafner, carries more than a supporting role, occasioning a warm tribute to Cortázar’s long lost friend and first American translator, the poet Paul Blackburn, who inspired the use of such a van years ago.

Given his tireless activism by then on behalf of Latin America’s ongoing struggles (royalties from the French and Spanish editions of the book were donated to the Sandinistas), the fantastic element in Cortázar’s later stories increasingly seemed rather a haunted reality.  This quixotic voyage south granted a brief hiatus from weightier concerns, in the couple’s pursuit of a greater intimacy with the world as with each other.  Indeed, their journey became a marvelous honeymoon, all the more in that Dunlop herself, though much younger than him, died not five months after it was over.

published in Review: Literature and Arts of the Americas (New York) 84 (May 2012)


Published in 1972, Prosa del observatorio was unique in Cortázar’s oeuvre both for its subject and form, while remaining true to his indomitable spirit.  In eighty pages, the book comprises an elusive poetic essay built from two interwoven strands, plus thirty-six photographs taken by the author a few years earlier on a trip to the maharajah Jai Singh’s observatories in Jaipur, Delhi.  As a counterbalance to reflections on the starry heights, the text considers in turn the inscrutable depths where the strange life cycle of the Atlantic eel plays out.  Each realm poses a challenge to science, with its need to track and define hidden patterns, and each ultimately defies the imperatives of precision instruments by asserting the integrity of all that lies beyond what can be known by the rational mind.

In fact, what attracts Cortázar to the observatories of Jaipur is less the measurement of the stars than the efforts by the eighteenth-century ruler to fathom the enigmas of astronomy.  The photos depict marvelous structures, full of evocative curves and angles and openings, conceived according to some grand plan; dominating most vistas, though, are the many sets of stairs, which Jai Singh would ascend “to interrogate the sky.”  The Argentine writer shows a comparably ambitious reach in weaving together the worlds of above and below, as well as laying out an imaginative space, a Möbius strip of simultaneity, where time immemorial abuts the immediate sensual present, and the fragile illusions of human certainty can be intercepted by the grace of the unforeseen.  Much as he details the elaborate migration of the eel, and its widening resonance as metaphor for natural and evolutionary forces, the spark in his inquiries points always to humanity, “something that comes from music, amorous battles and seasonal rhythms . . . toward another understanding.”

As in most of his work through the 1960s and ‘70s, and signaling his inheritance from surrealism, Cortázar seeks “another possible profile of man.”  From the outset, as rendered in Anne McLean’s elegant translation, he embraces the slipperiness of knowledge and language itself—“the sargassum of time and random semantics, a verb’s migration: discourse, this course, the Atlantic eels and the eel words.”  The seemingly distinct realms of sky and sea, if not quite reciprocal mirrors, work in tandem to mark out the orbit of his thinking in this text, as they continue with their implacable and mysterious systems to penetrate not only each other but also the terrestrial life of the writer-observer who always maintained an attitude of permeability to all that surrounded him.  Such was the creative principle he lived by, embodied in his notion of the fantastic:  how at any moment it could enter upon daily reality.  That same instinct propels him forward here, as he keeps watch for a fortuitous opening in the expected order, “touching on something that doesn’t rest on the senses, a breach in succession.”  Through that opening the new man—humankind sprung from its stale habits—may establish “a field of contact” which reconciles disparate modes of being.  Cortázar’s book offers us a start, articulating a constellation of its own from previously unexplored connections.

published in Review: Literature and Arts of the Americas (New York) 94 (May 2017)


At the end of his life, Julio Cortázar put together a book that was four decades in the making. Published soon after his death in 1984, Salvo el crupúsculo constituted his collected poems, many of which had hardly been seen.  Often written in the margins, while changing planes or in other situations of travel, they offer in all their curious shapes and tones quick doses of the Cortázar spirit, his music and heart, and that playfulness he always managed to surprise us with. Stephen Kessler's fluid and friendly translations were surely rendered with the ear as guide, for the poems and occasional prose texts invite us in, effortless yet beguiling, a familiar voice.
In much of his work, Cortázar liked to bring into public view the process of elaborating the book in hand; to make the making a visible part of the book. Every so often, among the poems here, he sets off on a series of reflections regarding philosophical and esthetic questions as to that making, abetted by his longtime alter egos Calac and Polanco in never taking himself too seriously. We know his task was daunting in its way: to gather a lifetime of scattered poems, otherwise irretrievable moments from the vast past among so many notebooks and loose pages, decide which should survive, and devise some way to assemble them. After much trial and error, he found he had to let the poems—and chance—suggest their own sequences; and within that, like a form of punctuation, he laid out his intermittent prose reflections. His intention was not to assemble a collection so much as to seek "a poetic ecology" in how they might work together. "To accept no other order than that of affinities, no other chronology than that of the heart, no other schedule than that of unplanned encounters, the true ones."
In that light, Kessler has nicely met an added challenge since his substantial bilingual edition is but a selection—one-fourth—of the full Spanish original (and the 1997 City Lights edition was considerably smaller). Save Twilight shows us Cortázar in all his tenderness, with his love poems and his extended dialogues with himself and his nostalgias and his debates. It also grants us a lovely glimpse over his shoulder as the older writer in declining health revisits these various moments in his earlier self. Not many poems are dated, but those from his early years seem particularly resonant considering when they happened in his life. A few are marked as being from 1951, the year he moved to Paris for good at the age of thirty-seven, while some poems near the close of the book are from 1949, written at the end of his first trip to Europe and on board the steamship back to Argentina. Yet for all his travels and his many years abroad, as the book makes plain, he never really leaves the city of his youth. He sums up the perpetual dilemma in a short, undated poem from the middle of the book:

You see the Southern Cross
you breathe the summer with its smell of peaches,
and you walk at night
my little silent ghost
through that Buenos Aires,
always through that same Buenos Aires.