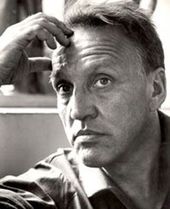 
American film and theater director Joseph Losey (1909-1984) was blacklisted in Hollywood in the 1950s and moved to Europe, where he worked for the rest of his life, mostly in England.  Three of his films were based on adapted screenplays by Harold Pinter (The Servant, 1963; Accident, 1967; The Go-Between, 1970).  Other notable films include Eva (1962), with Jeanne Moreau; Modesty Blaise (1966), with Monica Vitti; The Assassination of Trotsky (1972), with Richard Burton; The Romantic Englishwoman (1975), with Glenda Jackson and Michael Caine; Monsieur Klein (1976), with Alain Delon; the Mozart opera Don Giovanni (1979); and The Trout (1982), with Isabelle Huppert.

This interview took place in Paris, in the fall of 1982.


You consider The Trout to be your most open-ended film.  To what extent did the actors fill out the characters?

A great deal, more than usual, for a variety of reasons.  We worked almost entirely on location, so we were together not only for the shooting, but also for the hotels, the meals, and travel, which helps.  Another reason is that the script was never completely finished, so there’s a degree of improvisation.  I normally try to work this way anyway, but I think in this case it was more so.

What are the most significant differences between your film adaptation and Roger Vailland’s novel?

The book was 1964, the film was 1982.  That’s a difficult period, because there’s a big difference between the Sixties, the Seventies, and the Eighties as decades.  It’s not a big enough difference to make it a period film if you did the novel, but it is a big enough difference so that a lot of things that were acceptable in the novel are not acceptable in a 1980s film.  So we had the period thing to cope with, in terms of motivation and explanation, and even how it looked.  Vailland was talking about multinationals in a funny, naïve way.  Now everybody knows a good deal more about them and they’re more or less taken for granted.  Also, he placed all that in Hollywood, multinationals that had nothing to do with movies, where it is now not very important.  I needed a completely different environment; I wanted to find a country where there was a traditional background with a modern Western position in all that on top of that tradition.

Would you talk about your work with screenwriters, how some of the collaborations differed?

I’m glad you brought it up, but it’s a big subject.  It seems obvious that you don’t know that Franco Solinas died this week, suddenly, without any warning.  It’s an immense personal and professional loss for me.  I’ve worked with Stoppard, Mercer, Pinter, Semprun.  I’m sure I’m forgetting some, but in my opinion Solinas was among the top.  I think he was one of the top half-dozen in the world, he did many of the great films of our time, such as Battle of Algiers and Burn!  He did Mr. Klein with me.  He’d just finished a new film for Costa Gavras.  He wrote two other scripts for me and Costa Gavras, which we couldn’t get mounted.  So it’s really a tragic, horrible death, he was only fifty-five.  With Franco, of course, it was a different way of working, because he always wrote in Italian, although the films were always intended for an English audience.  Mr. Klein was an exception, but that also was written in Italian and translated into French.

Pinter is the man with whom I’ve had the longest collaboration, and the very closest one personally.  It’s mostly talking things out for months or even a year, and then it gets written very quickly.  With Stoppard there’s less talk and even quicker writing, but not always of the same level.  With Mercer it was much as with Pinter.  Mercer was more unpredictable—extraordinary moments and then sometimes he was quite bad.  He was also in his middle fifties when he died.  Jorge Semprun was not an important collaborator.  I don’t think he was terribly interested in Les Routes du sud (1978).  I like him personally, but I didn’t get a great deal from him.  Monique Lange was very pleasant to work with on The Trout, we worked together all the time.  She contributed a lot  to the film, mostly poetic and philosophical things, but very good, and big departures from Vailland.

Are there any more projects in mind with Pinter?

He wrote Proust, of course, which has been published very successfully, but we haven’t been able to get the money for it.  We’ve talked about several other projects, but none of them have yet come about.

What is the latest stage of the Proust project?

The latest stage is that it was published and put on the shelf [The Proust Screenplay, 1977].  That probably will be it, because the script that would have cost six or seven million in 1970 now would cost twenty-five or twenty-six million, and people are afraid.  As Lew Grade said, when it was presented to him, “Who the hell is Proust [pronouncing as in ‘owst’]?”  The locations are disappearing, it’s an enormous cast, so it becomes terribly expensive, no matter how moderately you do it.  But I think it would be a very commercial film.  It’s one of the greatest screenplays ever written, perhaps the best.

Has Brecht’s work influenced your own?

I learned a great deal from him, but the only thing of Brecht’s I’ve done is Galileo, which I’ve done twice on the stage—once in Los Angeles, once in New York—and once as a film (1975).  That took nearly thirty years to get made as a film, from the time I first did it in Hollywood.

I think Brecht may even have learned something from me.  He came to see the Living Newspaper [produced by the Federal Theatre Project, under the WPA, in the mid-1930s], of which I was a co-founder and director of several plays.  He was immensely impressed and felt very much that it was related to the political theater of the Twenties in Germany.

Your films employ a certain measure of ambiguity, whether in terms of the relationships between characters or their motives, thus enriching a film’s texture, the way ambiguity works in poetry sometimes.  Has this also made the reception of some of your films more difficult?

Obviously.  It’s nice that you say it makes it richer, because commercially-minded people find it makes it less rich in terms of their takings.  That’s because they are not out to explore, or to communicate, or to enrich anyone except themselves.

Why did you maintain the ambiguity of Mr. Klein’s being Jewish?

Do you feel fantasy elements can be used in a film to make political points, as in The Boy with the Green Hair (1948)?  You haven’t done many films like that since.

No, but there wasn’t much opportunity to.  Even there, the fantasy element would’ve been more easily applicable to an anti-racist theme than to an antiwar theme, so it was pushed in a slightly distorted direction.  The Damned (1963) is not really fantasy, if you like, but it’s science fiction.  It’s very highly political.  For me it’s a stronger antiwar statement by far, and based very much in an attitude and awareness of class, than The Boy with the Green Hair.  It depends on how much you’re allowed to say.  The Boy with the Green Hair was just on the edge of what one could say then.

Do you feel any of your films have been misread by critics and other opinion-makers?

Don Giovanni was completely misappreciated by most Americans, but not in Europe or in England.  Secret Ceremony (1968) was perhaps misread.  Certainly it was totally misread by Hollywood.  They just weren’t interested in that kind of reading.  The people that were distributing the film, not necessarily the audiences seeing it, wanted a more popular reading.

How would you characterize your relations with critics?

I’ve had very few problems with critics, because I think it’s usually unworthy and useless to dispute with them.  But when a critic goes out of his way three different times, with a half page at a time, to attack something, and disregards letters that I know have been written to him, then that’s another matter.  Then he is using his power to impose his own lack of appreciation or difference of opinion, and it’s an abuse of the press.

Why has the response to your films been greater here in France and in England?

In the first place, my most mature work has been done here.  It’s also a much more cinema-conscious world, and a more educated one, by virtue of the fact that they’ve got better films.  There’s much more exchange of real information about filmmaking and film viewing and film criticism here than elsewhere, up to now.  It’s beginning to happen elsewhere.  I’ve been invited to the San Francisco Film Festival, and to Chicago, but never at times when I could go.

How does Hollywood look to you now?

I think it’s in the hands of the money-brokers and the agents, both the actors’ agents and the CIA.

Do you have any particular desire to work in the States again?

Oh, sure, naturally.  I come from that background.  I’m probably more deeply rooted, more strongly and more educatedly, than a lot of those people who make it impossible to work there.  Of course I want to, but whether I will ever be able to is another matter.