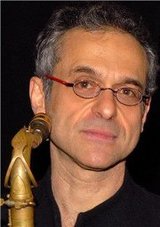 
Ever since tenor saxophonist Ivo Perelman burst onto the scene in 1989 with his first album Ivo (K2B2 Records), it has been clear that a new force was at work in which Brazilian music and jazz could no longer settle into a complacent blend of easy listening.  In the five records he has released to date, Perelman has plumbed the richness of Brazilian melodies and rhythms down to their fiery core, with a fearlessness to put most saxophonists to shame.

A native of São Paulo, born in 1961, he became a child prodigy on classical guitar, switching in his late-teens to other instruments before embracing the tenor.  After studies in architecture, he left Brazil in his early 20s to travel, eventually reaching the United States.  He studied saxophone in New York, Boston, and Los Angeles, where his first record was produced, moving back to New York by the time he made his second record in 1991.

These two sessions formed part of a projected trilogy devoted to Brazilian children’s songs, in which Perelman adapted traditional melodies, opening them to unsuspected flights.  Ivo draws on European-influenced songs, whereas Children of Ibeji (Enja) explores African elements; both feature a cutting-edge ensemble of mostly American jazz musicians, Brazilian percussionists, and the unorthodox Brazilian vocalist Flora Purim.  Throughout, his burning romantic horn leads the way, grounded in the simple beauty of the tunes while reaching, somewhat like John Coltrane, toward their outermost implications.

Man of the Forest (GM), recorded in 1994 for noted composer Gunther Schuller’s label, marks a detour from the trilogy and yet a continuation of Perelman’s methods, in that he takes as his point of departure motifs by Brazilian composer Heitor Villa-Lobos, whom he studied in his youth.  Employing a similar type of instrumental group as before, his extended treatments pay ample tribute to the composer’s themes as well as the traditions that inspired him, rhythmically and melodically, while forging a music that is genuinely new on its own terms.

Gradually, Perelman’s playing has grown more unrestrained, throatier in its sound, its lyric energy more intense.  His recent interest in smaller groups has emphasized this tendency, as shown by Soccer Land, recorded later in 1994 in Brazil for his own label, Ibeji.  A duo with veteran drummer José Eduardo Nazario, formerly of Brazilian jazz dervish Hermeto Pascoal’s group, the music is again based on traditional themes (plus one song by Luiz Gonzaga).  The highly charged and expressively fluid improvisations that result are all driven by traditional rhythms that have probably never been heard before in such a context.

A year after that session, Perelman at last completed his trilogy, yet with a twist.  Despite his efforts he could not find any children’s songs from among Brazil’s Indians, but on a visit to the northeastern state of Ceará he was put in touch with three children from the Tapeba people who sang for him some traditional songs from the tribe’s ritual dances.  Only the elders knew what the words meant, though they no longer spoke the language.  Perelman’s tribute to this encounter became the just-released Tapeba Songs (Ibeji), also recorded in Brazil.  The melodic hooks, played on saxophone as he heard them, provoke spirited improvisations set against authentic or hybrid rhythms from all over Brazil, as played by Nazario.  Joined by piano or guitar, the trio discovers such harmonic depths to the songs that they have duly reciprocated the gift that the Tapeba gave them.


Saxophonist Ivo Perelman has not abandoned his roots, but he does draw on them more selectively as his playing moves into the freer, improvised realms opened up by musicians like Cecil Taylor.  On Bendito of Santa Cruz (Cadence), a duo with piano, Brazilian folk songs serve as themes to launch his hurtling, far-reaching flights.  With the stellar trio on Sad Life (Leo) he uses just three Brazilian songs, his fiery lyricism mostly self-generating.  His most thorough weave of the two traditions, Brazilian Watercolour (Leo), leaves no expectation unturned in his search for hidden springs.  By contrast, En Adir (Music & Arts) is a startling transformation of traditional Jewish songs, as though he were in on the secret name.  But lately he has foregone all such grounding:  on Seeds, Vision and Counterpoint and, with string quartet, The Alexander Suite (Leo), he reaches new intensities of expression, of sculpting space with the breath.

Drawing comparisons to Ayler on his first records, with his incandescent lyricism mining the music of his native Brazil, tenor saxophonist Ivo Perelman has developed into a full-blown energy player.  His collaborators over the past decade include many who worked with Cecil Taylor, Braxton, Coltrane.  In recent years he has also become a prolific abstract painter, thus the double trio date is dedicated to Helen Frankenthaler, a seven-part suite of almost two hours.  The music is lush, supple, highly elastic in its changing textures, his horn richly grounded in the two basses of Dominic Duval and Mark Dresser and the drumming of Jay Rosen and Gerry Hemingway.  This seems an ideal formation for Perelman, given a work of such breadth, allowing him ample space to rage and rove and also to peer around corners.  On The Ventriloquist, his tenth record for the Leo label, the balance is shifted for he shares the role of primary voice with the wonderfully inventive Louis Sclavis on bass clarinet.  Indeed, they both seem to be throwing voices, like jugglers with bowling pins or fiery batons, continually feeding off of each other, propelling them both into a sort of ecstatic birdsong.