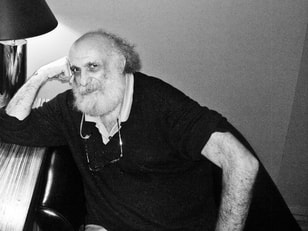 published in Rain Taxi (Minneapolis) 7:1 (Spring 2002)
​Like a genie making a mad dash, Ira Cohen is not easily contained.  A longtime traveler to Paris, Tangier, India, Kathmandu, associate of the Beats and the international avant garde, since the early 1960s he has been an active poet and photographer, yet his work remains hard to place (and to find).  It might well be that he is most at home transmuting signals from far and near, perched in the midst of his native Manhattan, ready to take flight at a moment’s notice.

Poems from the Akashic Record is, above all, a book of remembrances, but in the spirit of its title:  the Sanskrit akasha, toward the shining, the heavens, as to invoke God’s memory book of past, present, and future.  Brimming with tributes to friends, mentors, family, and accented by his enigmatic photo-portraits, Cohen’s book does not so much mourn the loss and passing (Jack Smith, Paul Bowles, Angus Maclise, Gregory Corso, his mother Faye) as it celebrates the sparks they left or that others continue to leave in the poet and the world.  Indeed, such is his belief in the prophetic role of poetry that time itself is turned inside out.  “Elegy,” for instance, was written not after Brion Gysin’s death but decades earlier when they first met:  “You have left.  We lived on the edge of the sea’s awareness ... You are the clarity of death above the staleness of towns.  Above the pinnacles isolated as men crowd doorways you ride the mystery of shapechanging.”

Though mostly of recent vintage, many poems date from previous decades, so that the book’s intuitive order allows the poet to be “a not unhappy / ghost remembering everything, the warp & woof of memories ... / Dream shuttle makes me exist everywhere at once” (“From the Moroccan Journal 1987").  It would seem there is no beginning or end to the book, in the steady weaving of ordinary details and his tender regard for those close to him, but rather a constant seeking:  “I spent forty years taking photographs / trying to find God’s face--- / Today I left my camera at home ...” (“Credo”).  Attentive to mystics and seers of every stripe---his film Kings with Straw Mats (available from Mystic Fire Video) documents India’s wild festival of holy men, the Kumbh Mela---Cohen nonetheless writes with an honest conversational voice, inhabited by a sort of divine laughter.  “The miracle is in what one still has or in what / one has given away ... / My father dreamed of losing something in the subway / as he was dying / And God, did he ever dream he could lose / a galaxy, could a universe be misplaced, forgotten / while standing in line at the Post Office?” (“Can Writing Bring It Back?”).

In the end, the body is but a point of departure, for he would build a loose, farflung community wherein all might “bathe in the shimmer of liminal possibilities / Decenter your vision & cross / the border of human nature / Your mind is a diagram, / your heart can swivel in any direction / but if you can’t shake your ass / you’ll never make it to the other side.” 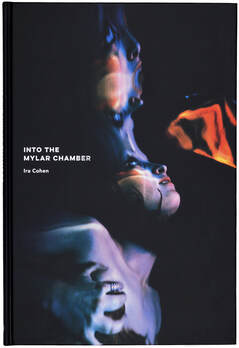 ​published in Hyperion: On the Future of Aesthetics (New York) XIII:1 (Nov 2020): 139-142
There is so much to look at in Ira Cohen’s photographs from the Mylar Chamber. Each glance finds more to see even as the pictures jump out at us  with their bright, bending colors and the mysterious poses of the figures, which multiply and disintegrate amid scenescapes concocted from an array of cloths and materials, refracted endlessly. Theatrical in nature (costumes, makeup, lighting), the images often echo moments from art history or mythology or comics, while carrying the charge of the uncertain present in which they were made. Ever unpredictable, they are playful in spirit and form, much as the light is playful springing off the mirrored surfaces: after all, it is in that bank shot where the photo emerges, the camera gazing into the compounded reflections to track where they go.

Initially a poet and publisher, Cohen (1935-2011) took up photography as an additional practice relatively late, in the mid-1960s after returning to New York from four years in Tangier. Living in a loft on the Lower East Side, in 1968 he built a room there made of hinged boards hung with sheets of silver Mylar to serve as a photo studio for exploring the possibilities of mirror effects. That same year, enthused by these experiments, he also made his first film by way of the Mylar techniques, The Invasion of Thunderbolt Pagoda, a trippy communal performance that retains a certain glow in the annals of underground cinema. The magic chamber in his loft, however, remained the prime focus of his activities. Until 1971, he would gather friends and collaborators (Bill Devore, Jack Smith, Angus MacLise, many more) for extended sessions in which they helped develop an elaborate iconography that was quite unique. The work gained enough notice that it led to commissions for record covers—his remarkable portraits of Jimi Hendrix, John McLaughlin, the rock band Spirit became part of those experiments in Mylar vision and of the widening cast of characters in that strange dream theater.

The photos from that three-year period, before Cohen left New York for Kathmandu, were much talked about in their time and through the decades since. They left a resonant trace in the cultural memory. Yet somehow it is only now, fifty years later, that a book has been devoted to this spellbinding work. Into the Mylar Chamber, a large format volume, offers a rich dossier of sixty-five photos interspersed with brief extracts from his poetry, all surrounded by seven texts by artists and scholars and more photos tucked among them. The very opening lines of the book, from a 1999 text by Cohen, lay out his intentions clearly: “I make my photographs in the tradition of the alchemist and rely on the forms and rituals connected with the arts of divination and scrying (crystal gazing). Searching in a world of reflections I invoke the Spirits, both celestial and demonic.” That’s quite a statement of purpose, but the pages that follow do bring the goods. The viewer is soon caught up in the painterly sweep of the images, often just a single figure among its own fused multiples, repetitions of a face or a leg and with each repetition a slightly different angle and distortion in the mirrored reflections so that each face a little different, as though one person were many at the same time but how can that be.

In an interview with his longtime associate Ira Landgarten, who scanned and restored the images in the book, Cohen spoke at length about all that went into the photo sessions in the Mylar Chamber and the intensity of the experience for the person posing, hours on end in that mirror room watching their own image. For himself as photographer, being in the moment was especially delicate: “Sometimes an image would be there, and it would be something that would make you almost go mad to be able even to see such a thing with your eyes! Then you would want to photograph it, and if you weren’t quick enough there would be a slight vibration and the Mylar would ripple into some other shape.” In other words, he was almost constantly faced with a moving target, since what he saw continued to change in the act of looking. As he grew more familiar with the properties of the material and its effects, instinctively he had to develop some kind of new esthetic to recognize what he might be looking for, in all its wondrous dynamics. What he was on the trail of was “the metamorphic image,” in Allan Graubard’s words, “the image of a moment that surpasses itself.” Or as Alice Farley notes, in these photos he “allows us to see what is invisible. His use of the mirror is not a trick. It is a way in.”

The full historical context of the Mylar photos is laid out in Ian MacFadyen’s learned and illuminating essay “The Mercury Mirror.” Considering the breadth of cultural and intellectual currents at play there, we are better able to appreciate the implicit depths in Cohen’s work beyond our direct perception of the images. MacFadyen situates the Mylars in a lineage of apparitional or spirit photography, which goes back to the medium’s beginnings in the effort to reveal ghosts and other paranormal phenomena. He traces the use of mirrors, and the regard for their hidden powers, from the ancient Chinese and Greeks through to the Elizabethans and to twentieth-century antecedents in film and multimedia experiments. The essay also investigates Cohen’s lifelong interest in esoteric spiritual practices alongside his fondness for elements of popular culture, notably Marvel Comics, all of which helped shape his sense of the Mylar pictures as “archetypal projections.” It is almost dizzying, the wealth of touchstones found in the Mylar photos; one has only to keep looking.