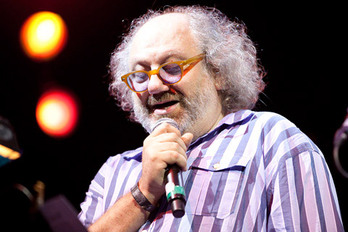 Photo by David Andrako
_The Dream Frames of Hal Willner

written for Artforum (New York) in 1990, but never published


Its other qualities apart, the past decade has been marked by a new emphasis on the mix we make of our culture.  For some artists it has been a survival tactic to bypass the limits of genre, to reach outside the familiar circuits for fresh ideas.  But it also reflects the desire to confront a larger world, and to redefine one’s work in light of that.

Until recently, visual art held the uncontested lead in this tendency toward mixing, starting with the collage:  one could actually see the disparate elements employed and come to understand how they might fit together.  A comparable potential in music took longer to assimilate, though by now it is all around us, especially in the popular realm, from the re-mix of hip-hop to the rapidly mutating forms of world music.  Following his own lights amid such impulses is record producer Hal Willner.

Like many of his generation, Willner, 33, was raised on pop culture, turning toward jazz as a teenager.  He is best known for his series of multi-artist tributes that began in 1981 with Amarcord Nino Rota (Hannibal), which enabled him to unite his various enthusiasms through the concept of the anthology album.  Rota’s music, his atmospheric scores for Fellini films, supplied fertile ground for new interpretations, anchoring the diversity of the talent chosen.  Willner’s emphasis on jazz at the time proved a useful starting point, since improvisers are often quite fearless in tackling work that is new to them.  Pianist Jaki Byard, for example, whose solos open and close the record, hadn’t heard Rota’s music till he walked into the studio.

One constant holds true for musicians who take up Willner’s challenge:  while their sound remains instantly recognizable, they will nonetheless sound like they never have before.  As he puts it, he is the frame and they are the picture.  For him, stylistic confines no longer hold much force except as vague references, so he is always on the lookout for unexpected combinations, both in the participants he assembles and in the material he offers them.

In crossing boundaries Willner broadens his audience.  The juxtapositions he proposes add dimension to the artists involved, for they are seen in a new and unique context.  Each album, full of bright surprises, defies the simple use of categories like jazz or pop, launching the listeners into a process of discovery.  Particular musicians or the composer may draw them in, but they end up hearing other voices as well that would not ordinarily have appealed to them.

On the Rota date, only one piece is performed by pop musicians, an ethereal waltz with Chris Stein and Deborah Harry of Blondie.  However, between That’s The Way I Feel Now (1984), devoted to Thelonious Monk, and Lost In The Stars (1985), a tribute to Kurt Weill, the balance of artists shifts away from the jazz world, increasingly diverse, till it swirls together in the fantastic blend of Stay Awake (1989) (all A&M), which presents music from vintage Disney films.  Willner designs a sort of dream voyage to the domain in question, the material posing its own terms on each occasion.

The Monk record, notable for its freewheeling treatments, gives rockers like Todd Rundgren, NRBQ, Joe Jackson, and the duos of Chris Spedding/Peter Frampton and Steve Kahn/Donald Fagen, the chance to test their chops on the quirky tunes, alongside sessions by former Monk sidemen like Steve Lacy’s duo with Charlie Rouse and Johnny Griffin with The Carla Bley Band.  Monk’s spirit reigns throughout, from the oblique renditions by John Zorn and Eugene Chadbourne to Sharon Freeman’s shimmering arrangement for five French horns.

The Weill album, primarily his theater songs, forces the issue of genres further.  When Lou Reed does “September Song,” or Marianne Faithfull performs “Ballad of the Soldier’s Wife,” what type of music are we listening to?  How can Tom Waits’s gritty interpretation, and Sting’s, and Zorn’s, and Van Dyke Parks’s lush arrangements, plus instrumentals featuring bassist Charlie Haden and saxophonist Phil Woods, all fit into the same program?  Yet it works.  Willner could echo Weill’s statement: “I have never acknowledged the difference between ‘serious’ music and ‘light’ music.”

His enterprise reaches its grandest proportions with the Disney music.  That record achieves the textures of a tapestry, its medleys drawn from many movies, and here Willner’s sense of a narrative thread, always present, becomes most palpable.  As in film he storyboards every album, spending a long time editing and sequencing the tunes so that they will come off as “little journeys or little nightmares.”  The ordering of the pieces, how they flow in and out of each other, how they are framed, determines the full effect.  “It’s very important to me,” he says, “to have a beginning, middle, and end—that a record build.”

This concern with a narrative structure is hardly foreign to the idea of uniting unlikely parts, and represents perhaps a completion of the urge for mixing.  Most artists under forty grew up amid a bewildering array of high and low culture, where nearly everything was available and jumbled together, so the task of finding a coherent order there, for oneself, was rather daunting.  How to digest it all in the same head.  The easiest means became one of exclusion:  either Kierkegaard or The Beatles, not both, except at parties.  Some, though, chose to struggle against the disintegration of their own experience, and for those working in music, which like writing commands a different sense of time than visual art, the glue of narrative was a natural recourse.

Stay Awake sparkles in its twists and turns, from the delicacy of Natalie Merchant and Michael Stipe’s “Little April Shower” in the opening medley to Los Lobos’ rollicking “I Wan’na Be Like You,” then on to the smooth blues of Bonnie Raitt’s “Baby Mine” and Waits’s spooky take on “Heigh Ho.”  Nor does the adventure let up, not when Sinead O’Connor’s fragile “Someday My Prince Will Come” feeds into Sun Ra’s fanciful “Pink Elephants On Parade” and Harry Nillson’s kaleidoscopic “Zip-A-Dee-Doo-Dah,” eventually to close in the opulence of Ringo Starr’s “When You Wish Upon A Star” with a trumpet solo by Herb Alpert.

The newest tribute album, Weird Nightmare (Columbia), devoted to Charles Mingus, turned out to be the trickiest for Willner.  Though it was the longest in planning—initially conceived back in 1984—only recently did it come into focus when he found an overall sound to embrace the otherworldly implications of Mingus’s music.  The key was found in that classical renegade, the hobo composer Harry Partch, who invented a slew of bizarre instruments to convey what he heard.  To better contain the production a house band was formed, including guitarists Bill Frisell and Marc Ribot, bassist Greg Cohen, and trombonist Art Baron.  On each tune guest artists sit in, such as Don Byron, Vernon Reid, Henry Threadgill, Gary Lucas, and, on an eerie version of the title piece, Elvis Costello.  Mixed over a wide array of Mingus tunes, excerpts from his autobiography are read by Robbie Robertson, Chuck D (of Public Enemy), Hubert Selby Jr., Leonard Cohen, and Dr. John.  The musicians double on Partch’s strange instruments, guided by expert Francis Thumm, lifting Mingus onto another level.  A few pieces were also produced separately:  Bobby Previte’s jug band version of “Open Letter To Duke,” and two Charlie Watts sessions with the Uptown Horns, one featuring Keith Richards.

Willner’s approach to these tributes in effect redefines the notion of what is classic.  By starting from a jazz aesthetic, in his will to improvise, he assumes a great playfulness exploring music of the past, so that it not only remains alive but grows.  Respecting the spirit of the composers foremost, the new interpretations render them more popular than they already were, for they are seen to be accessible to a wide range of voices far beyond their original context and thus worth discovering again.

The instinct for recasting a sound, mixing in a fresh spray of colors, has served Willner in his work with individual artists too.  After the Weill session, he produced Marianne Faithfull’s next record, Strange Weather, and her live album, Blazing Away (both Island), resulting in a new look for her.  She bloomed into an interpreter of songs dating back to the 1930s, her smoky voice showing greater expressive powers.  For Irish singer Gavin Friday’s Each Man Kills The Thing He Loves (Island), the producer assembled a band that made Friday’s songs seem as if for lovers lost in a cabaret at the edge of the world.

For nearly ten years Willner has concurrently been employed in television, providing a testing ground for his ideas.  With the show Saturday Night Live, where his job has been to find the incidental music to accompany comedy sketches, he has had the full run of the NBC archives.  More recently, he was also guest producer for the show Night Music, where, much like on his tribute albums, he mixed together musical styles.  Bridging media by way of music has thus been a part of Willner’s program.

In 1986 he initiated a spoken word series, for executive producer Michael Minzer’s Paris Records, so far yielding Allen Ginsberg’s The Lion For Real and William S. Burroughs’s Dead City Radio.  His aim is to treat the words for their musical effect, creating an environment for the material where listeners can receive it.  The two albums provoked different methods.  A dozen musicians composed settings for various Ginsberg poems, recording them live with the poet.  The great variety of the music, emotionally faithful to the poems, serves to liberate the work from its Beat trappings, making it timeless.  More radical means were applied to the Burroughs record.  The writer left it up to Willner to decide on the music, who found thirty-year old recordings of the NBC Symphony Orchestra, cuing them with tapes of Burroughs reading as the ultimate context for his work.  Subversive as the texts are, placed against the music they reveal him to be startlingly in the American grain.

Discovery may imply rediscovery, as Willner has shown.  For the first in a series of music from the golden age of cartoons, he produced The Carl Stalling Project (Warner Bros.).  John Zorn points out that music for this medium was way ahead of its time, with its rapid changes and imaginative leaps.  Willner and executive producer Greg Ford listened to hundreds of hours of tapes, to find what could work best on its own, re-editing the old recordings.  Again the listener is taken on a journey, while shown the full measure of Stalling’s accomplishments.

Having made a name at stirring things up, Willner remains remarkably clear about his purposes.  “One person well-known in the avant-garde told me he didn’t really like my records because he felt that anyone can listen to them.  I thought, Huh?  Everybody has to learn from everybody now.  That’s what I’m trying to do.  And to keep an innocence and a childlike view on it.”
_