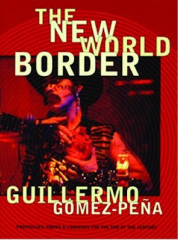 
Perhaps the greatest lesson we can draw from border artists like Guillermo Gómez-Peña is to realize that the border remains within ourselves.  Who we are, especially in the Americas, is a direct result of borders crossed in our own personal histories—across family lines, practices, geographies.  The border is a wound, a site of interruptions, the blurring of identity.  And the border artist is a provocateur who reminds us that far from being the limit-space demarcating cultural and political power, the border is always porous, always unsteady.

Born in Mexico City in 1955, Gómez-Peña has lived in the United States since 1978, mostly in southern California.  Known primarily as a performance artist, he has also worked as a journalist and been active in experimental radio and video,  exploring border issues and US/Latino cultural relations with an ever resourceful array of strategies.  The “rampant syncretism of everyday reality” that he experienced growing up helped shape his faith in a hybrid culture, which “expropriates elements from all sides to create more open and fluid systems.”

The New World Border, like his first book Warrior for Gringostroika (1993), gathers performance texts, chronicles, poems, and essays, written over the last five years.  The earlier book, notable for its exuberance in subverting received notions of culture and history, grouped different types of writing by category, so certain arguments tended to lose their force as they reappeared in each polemical essay.  Also, the three performance texts, as monologues, despite the ingenuity of their personae (the Border Brujo, the Aztec High-Tech), shared enough methods as to raise the question, Where does he go from here?

As a binational artist, Gómez-Peña speaks from a dialogical (even multilogical) viewpoint.  The new collection, therefore, seems truer to what he is about, and is a larger, more richly textured book.  The pieces speak back and forth to one another, developing and recombining ideas; critical discussions alternate with the speculative inventions of the creative texts, and the whole is enlivened by illustrations documenting his projects.  Almost in the middle of the book, his extensive performance chronology “Colonial Dreams/Post-Colonial Nightmares” anchors and unifies the various directions followed in the rest of the texts.  Cross-cultural collaborations with other artists have always been central to his aesthetic as a way of provoking mutual understanding, and the performance pieces here show the added dimension this can bring.

Hybridity, Gómez-Peña points out, is not an ideal but a cultural fact.  The old “binary models of us/them, North/South, and Third World/First World” are thus outdated, for the distinctions have intermingled.  He proposes, instead, the notion of “the Fourth World,” which turns away from myths of purity—national, linguistic, cultural, and the static identities that go with them—in favor of new topographies that better reflect the movement and exchange of different populations.  In “Freefalling Toward A Borderless Future,” the poem that opens the book, he sees “incredible mixtures . . . cholo-punks, pachuco krishnas, Irish concheros, butoh rappers, cyber-Aztecs, Gringofarians, Hopi rockers.”  In his essay “Free Trade Art Agreement,” he oppose “the sinister cartography of the New World Order with the conceptual map of the New World Border—a great trans- and intercontinental border zone, a place in which no centers remain.”

In the performance piece that gives the book its title, he imagines a time in the near future when the United States has undergone a process of severe balkanization, Spanglish is the “official” language, and “the ethnic/social pyramid has been turned upside down.”  To emphasize this new perspective, before performances he often segregated the audience so that white monolingual spectators might feel in the minority for a change.  The piece proceeds through a series of prophecies, animated by two performers assuming many voices, elaborating on the delirious results of the new alignments, which are of course disastrous for the old guard.  “The Euro-Americans who resisted interracial love became a nomadic minority and eventually ended up migrating south to work for maquiladoras and fast-food restaurants.”  Likewise, in a language lesson, the pupils are told to repeat in Spanish how the North Americans who didn’t learn to speak Spanish were totally marginalized, couldn’t find work, and in schools were considered retarded.

Perhaps Gómez-Peña himself might not exist had he not come to live and do battle in gringolandia.  Even before becoming an immigrant, from the distance of la capital, he had felt the power of the border fluctuating as between magnetic poles, the two sides attracting and repelling by their very contact.  But it was through the ongoing process of what he calls Chicanization that he achieved full status as outsider.  On return trips to Mexico he found himself considered a Chicano, while in California he was still seen by essentialist Chicanos as a Mexican.  In making the journey, he discovered, he no longer quite belonged anywhere—except at the frontier, the border—and that freed him to choose his own communities.

“Border culture is by nature one of recyclement,” he notes.  Indeed, he constantly recycles cultural clichés in order to twist them inside out and goad us to question our own  assumptions.  In “The Guatinaui World Tour,” a performance “as reversed anthropology,” he and writer Coco Fusco traveled to cities in Europe, the Americas, and Australia, where they resided for three days on public view in a gilded cage as “undiscovered Amerindians”; far too many people, they found, saw the exhibit as real.  “Borderama,” part of the “Dangerous Border Game” series, a site-specific group collaboration written with Roberto Sifuentes, challenges audiences in their fantasies about cultural others.  The first part, “Identity Escape Act,” concerns “a Hispanic who, having lost his way to Aztlán . . . right here, on stage . . . will find his inner indio”; Gómez-Peña then confesses the shocking sins of his “own internalized colonialism.”  The two artists team up again in “A Seminar on Museum Race Relations,” dressed as “sleazy motivational seminar instructors,” where they question the audience on its cultural sensitivities and end up fighting between themselves trading Mexican and Chicano insults.

Not surprisingly, the hinge to his work, where high seriousness meets deep playfulness, is language.  In his introduction, he explains to “the reader who, at times, will feel partially ‘excluded’ from the work” that his choice “not to translate . . . the sections in Spanglish, Gringoñol, bad French . . . is part of an aesthetic and political strategy.”  After all, hybrid culture is the product of those with a view from outside the dominant culture.  The luminous word-fusions he gleefully concocts show the genius of a hybridized language, where entire cross-cultural concepts may be conveyed in a single gesture.  So we find a character like the Naftazteca, one of two “cyber bandits” staging a pirate TV intervention on Thanksgiving Day; or a radio performance called “Chicanost,” in which global power relations have shifted inside out.  To help the poor uninformed gringo, Gómez-Peña also includes a “Glossary of Borderismos,” but it is hardly a straightforward guide.  There, we find terms like borderígena, Empty-V, Free Raid Agreement, and jalapeño pusher, but even as simple a word as television is given new meaning:  “White people’s freedom of speech.”  This vato loco may not be as crazy as he looks.