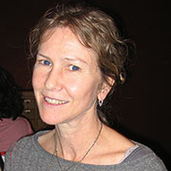 
Cole Swensen is a poet inclined toward luminous mysteries.  She proceeds by a dreamlike metaphysics to a place where the familiar breeds revelations.  Her work is non-linear, made up of shards of narrative, elliptical phrasings twined together; rare is the mention of specific names or histories.

There in the
photograph of your
perfect body
unsealed rooms
and the walker at the edge
of the highway a person
you don't
recognize
all the blinking lights
(from '11,' in the long poem "Numen")

For more than a dozen years, she has produced poems rather like small pools where readers might lose themselves in the play of reflections.  But in her writing since New Math (1988), the work has grown into a larger vision:  no longer the separate gems of wonder, her poems are as though broken open, grouped into clusters, their rhythms and melodic threads given space to develop and echo.  In this way, Numen, her sixth and most complex volume, comes off as a more centered and sustained enterprise, the book as an obliquely orchestrated whole.

It is a book of elusive presences and displacements, the pursuit of a face, God as "a child who might / Break in a glance," the imminence in numbers, and the recurrent figure of walking:  "Suppose one day the walking wouldn't stop, / became compulsive, step beyond step / and hours later it would be night and no longer / safe to be out."  Poetry is an act of discovery for Swensen, and her voice is marked by a constant sense of the marvelous (It's Alive She Says is the title of an early book).  There is a listening, an attention to the interstices of everyday life, to the glow of existence, as in '30,' the last of the 'Numbers' section in "Numen" which takes up most of the book:

All remains new, about to happen, or happening before our eyes in the disjunctive weave of her language.

The quality of the interruptive techniques she employs in the writing, and her capacity to revitalize plain language, owe partly to her interest in French poetry, from the oneiric flights of Nerval in the 19th century to surrealist and collage instincts and then the associative leaps and silences of contemporary poets.

But regardless of poetic affinities, Cole Swensen shows in Numen that she has her own ear.  In the unsystematic but musical symmetries of the book, objects and gestures keep reappearing, answering back and forth.  At the beginning, as at the end, a person reaches down to pick up "something small" that would disclose a deep heartbeat.  "To love is to remove the face," the book opens, and it concludes:  "When I was alone in the world / everything breathed."