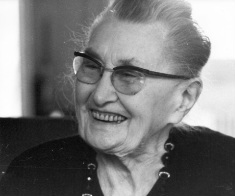 Photo by Séamas McSwiney
A Talk with Proust's 'Dear Céleste'


"My dear Céleste," she recalls his saying in her book Monsieur Proust, "you know everything about me.  You don't know how many people will come to see you after I am dead.  And, of course, you won't answer them, I know you."

Which, for 50 years, was true.  Then, in 1973, Céleste Albaret published her memoirs about her times with the author of Remembrance of Things Past, because of the lies and half-truths she had seen proliferate since he died in 1922 at the age of 51.

Céleste was Proust's housekeeper during the last and most difficult period in the composition of his masterpiece, which consumed him totally.  An invalid with severe asthma, he lived by night then, resting by day; he always worked in bed.  His dedication made him a recluse and his "dear Céleste" became, in effect, his lifeline to the outer world.

"I led the life that he led," she says, her memory scanning the century.  "I was always working."

At 90, Céleste lives quietly in a modern home just west of Paris, in Montfort l'Amaury near Maurice Ravel's house, where she was a caretaker a decade ago.  More Proustians than Ravelians came to see her---and Proust has never left her.  No mementos claim the visitor's attention, yet something is there.  "Those ten years were an entire life for me," says Céleste carefully, at which her daughter, Odile Gevaudan, smiles.

As a reader, I am constantly aware that the great writer could almost be as much a fiction as his work.  That is why I have come, simply to hear Céleste, to listen to her testimony in person, like all the others before me.  Two days earlier, the American ambassador to France had come, to present her with a Franco-American bicentennial medal of friendship.

Céleste remembers, and the memories return in waves.  She is old but not too fragile; she wants to help me with my coat.  And she still enjoys welcoming visitors from around the world.  "When they speak to me of Proust, I'm content.  Because I relive that time."  She is the most direct descendant of his own heart's poetry.

"When I met Proust," she recalls, "I had come from the provinces [the Lozère] and had never left my parents.  My husband lived in Paris.  He was a chauffeur, and had already known Proust.  For me, Proust was always a grand seigneur.  I learned a lot from him.

"The first time he asked me to stay at his home [she was 22], the war had broken out, and he said, 'Madame, I am going to ask you, now that I have no one, and I must always have someone, to make my coffee.'  He only drank café au lait; he didn't eat.  So I said, 'Yes, monsieur.'  And he said, 'Because if you would condescend to make my coffee, I will do all the rest.  I know that you don't know how to do anything.'

When Proust did occasionally go out in those years, it was always to gather details and renew impressions for his work.  "He was like a seeker, he gathered it all in his enormous memory.  He was occupied only with his work, he labored only for his work, he had only that."

And when he returned, they would often talk for hours together.  "When he saw on his watch that it was late, he would say, 'Mon Dieu, Céleste, you know I have lost time.  You are very nice, but we have been talking for three hours.'  But I think that in everything he did, he had his purpose."

Another book could have been made out of Céleste's recollections of those conversations, Odile points out, but the work would be too much of a strain now.  "He always said, 'You should write your diary,'" adds Céleste.  "'When I die, it will sell like the baker sells his petits pains in the morning.'  I said, 'You're teasing me, monsieur.'  He said, 'No, I've never spoken so much as with you.'  But I never did.

"I played a rare role in relation to Proust," she says.  "He spoke in a way that you couldn't refuse.  He was always very distant and very close.  He had a lot of charm.

"Proust was a whole universe.  He went deep inside his thoughts.  And he was always giving me advice, he saw everything.  I found all one could have there.  He filled me with joy, everything pleased me."

Realizing that Céleste's experience of Proust was so completely that of a living man, I ask if she read his work.  "I didn't like to read much then.  I read one or two of the books.  But when I read it now, it seems as though I'm talking with him.  I have the same sensation.  And I recognize in passages certain people he frequented, though he never told me that."

When Proust died, Céleste lost all desire for things.  "After that," her daughter Odile adds, "I was born.  I think she became attached to me because it was the thing that could save her from her memory and permit her to go on living.  She loved me as if I were Proust; she tried to put in me everything she'd learned from him.  That's very difficult for a child.

"I think that for my mother it was an extraordinary thing to meet up with Proust.  Even as a child she didn't like to go out, and she found in Proust what she sought but didn't know.  And he, in essence, found just the person he needed.  For my mother, it must have been the crystallization of her life."