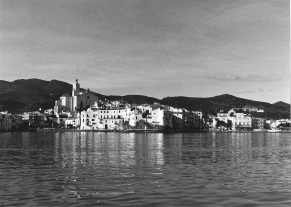 
Rounding the last mountain on a moonlit night, the village appears like a many-faceted gem.  Against the mercurial luster of the Mediterranean, the white walls of Cadaqués suggest a Cubist dream.

By day, the contrast is more classic.  Sitting at the waterfront cafés, like the Maritím or the Casino (which houses the village library and museum upstairs), you gaze out at infinity, slowly, all day perhaps.  The light changes infinitely, the shades of the sea, the anonymous yet distinct moments in time.

For such light the painters came early this century, the poets, the avant garde.  Salvador Dalí, who has called Cadaqués "the most beautiful village in the world," has lived over at Port Lligat here since the 1920s, having grown up in Figueras nearby.  The landscape, the horizon, appear in many of his paintings.

By way of Dalí came the poet Federico García Lorca, who wrote:  "Its fishermen sleep dreamlessly upon the sand.  In the high seas a rose serves them as a compass."  Picasso, Breton, Max Ernst, Man Ray, and Marcel Duchamp all spent time here (in the Melitón café a small plaque commemorates Duchamp's favorite chess spot---there are so many local chess players that they have a team to compete with other villages).

Located on the eastern edge of the Cabo Creus peninsula, about an hour's drive from the French border, Cadaqués is as proud a Catalan village as any.  Villagers join in sardanas, the Catalan national folkdance, on every conceivable holiday, including the fiesta mayor in mid-September that marks the end of summer.

Cut off from the rest of the Ampurdan region by the Rodes mountains, Cadaqués was once accessible only by sea.  It's said that Spanish Jews fleeing the Inquisition settled in this fishing village and were never discovered.

Few people make a living at fishing anymore.  The old fishermen mostly frequent the Casino, playing cards, telling stories of Cuba, reading the weather by the aspect of the sea and the wind ("when the tramuntana comes howling down from the north, it can make you crazy").  The old, crumbling sardine factory was bought by a developer and turned into an art gallery and apartments, one of which is the studio of Japanese painter Shigeyoshi Koyama.  Koyama, whose high-contrast studies of local vistas have moved toward the abstract, finds the place inexhaustible for his work and insists, "I'm here for the rest of my life."

The regional Catalan painters, like Vayreda C. and Casademont, work mostly in a figurative style, though the avant-gardist Joan Ponç often comes here as well.  Antoni Pitxot's work stands out in particular.  The landscape is never the same again after looking at his paintings.  He treats the rocks along this coast with such dazzling realism that he sees figures in their geography, even to mythical proportions.

Two foreign artists who seem more literally to paint the light here are Bengel, from Germany, and Phil Clarke, from Australia.  In Bengel's canvases, where a woman may stand in a columned arcade surrounded by water, you are brought to the edge of the mystery and transformation posed by this light.  In Clarke's work, in which a mussel shell may reveal a startling instant of reflected sky, there is a tranquil pleasure in natural possibilities.

The place seems to be timeless.  In Life Script, American novelist Jerome Rudes depicts the traditional values of native families, the succession of generations, and how the old local ways endure, despite its "discovery by the world of Hollywood."

Villagers and foreigners survive here because of their symbiotic relationship.  Building restrictions prevent overdevelopment and cause property prices to skyrocket.  British pop artist Richard Hamilton, French sculptor François Stahly, and explorer Michel Peissel all bought homes before the crunch.  Argentine poet Tomás Guido Lavalle, who runs the boutique Ca' María with his wife, says, "I would like to see the life through here a few more years.  But maybe we can find a house in one of the old villages a little inland."

Rosemary, fennel, thyme, and sage grow wild in the hills.  Olive and fig trees are scattered everywhere.  Bougainvillea and morning glories line the roads and alleyways.  Hiking along the cobbled path that winds down from the 16th-century parish church that stands above the village like a sentinel, Guido Lavalle points at the sheer angular sun-splashed walls.  "See that?  Why hasn't anyone painted that yet?"

It is not surprising that art should occupy a central position here, for the Catalans have a long tradition of learning and a highly developed aesthetic sense.  The church has an important baroque altarpiece begun by Pau Costa in the 18th century, and next summer will mark its 10th international music festival, with scheduled performances by Mstislav Rostropovich, John Cage, and Jean-Pierre Rampal.