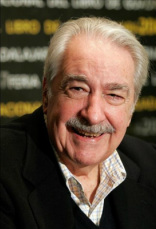 _Between Land and Water


For well over 40 years, Maqroll the Gaviero---sailor, wanderer, of vague origin---has been steering the pen of Alvaro Mutis toward one horizon after another.  Across every sea and continent the Gaviero, or lookout, lands in the most surprising adventures and Mutis, his devoted chronicler, pieces together the stories left behind.

Only in recent years has the Colombian writer Mutis begun to be translated into English, while Maqroll has grown to enduring proportions as a character in literature:  magnificent hero-traveler, connoisseur of defeats, always out to challenge his destiny.  For three decades, he appeared only intermittently, through half a dozen poetry books.  Then Mutis wrote seven novellas in six years, all featuring the incredible web of chance encounters that is Maqroll and his prodigious existence.

Mutis's own prodigious existence was given eloquent testimony by his old friend Gabriel García Márquez in a seventieth birthday tribute that told of many travels together (published last year in Review:  Latin American Literature and Arts 49):  "The complete works of Alvaro Mutis, his life itself, are those of a seer who knows with all certainty that we will never again find paradise lost."  It was Mutis who first gave García Márquez a copy of Juan Rulfo's Pedro Páramo, and Mutis has been the first reader of his manuscripts ever since One Hundred Years of Solitude.

Maqroll is a thinking adventurer, as much philosopher as man of action, reflecting on what he has lived.  He is also an avid reader and something of a writer:  the stories are often based on his notes, diaries, letters, compiled by a narrator who seems to be much like Mutis himself.  Both spent their childhood in Brussels, now live in Mexico, and have traveled---mostly on business---all over the world.  Both have a wife named Carmen, a brother Leopoldo, and a dear old friend known as García Márquez.

The first three novellas, published together in English as Maqroll (1992), recount several episodes in pursuit of quick money---an arduous upriver search for mysterious sawmills, a partnership with his sometime lover Ilona in a brothel of women dressed as flight attendants, gun smuggler for guerrillas---where he escapes with his life and questions each survival.

Of greater concern than events to Maqroll---he cannot help living by his own law, and after all he recognizes his capacity for extravagantly doomed schemes---are the friends and lovers he makes along the way, many of whom he runs into again.  The four novellas that make up the new collection, The Adventures of Maqroll (first published between 1988 and 1993), abundantly explore the network of such figures and some of them, like his great friend Abdul Bashur and the painter Alejandro Obregón, become sources as well for the narrator.  Like the previous volume, this book benefits from Edith Grossman's marvelous translation.  The richly detailed prose sounds so natural, it might have been written in English.

In the series, each tale or book overlaps a bit with those that came before, so that the story of Maqroll seems ever widening, lit with new moments, new lives.  Chronology is seldom linear but rather eddies in circles, making connections between points in time, and the reader might almost dip in anywhere as a point of entry:  in the novellas or through the earlier writings.  The Gaviero's death, it seems, was already told at the end of Mutis's poetry book from 1981, Caranvansary.  Yet in Los emisarios (l985), Maqroll returned for a few critical passages of self-reflection, moments of revelation along the way.  By the third novella, a few years later in the time of writing, he is standing at the threshold of old age, in love with a younger woman when it already feels too late for him.

Through the course of the present collection in English, previous episodes are glimpsed in passing---like many a story never told in full---perhaps with new details filled in or other connections followed.  An interesting editorial decision has placed these novellas in not quite the order of their original publication:  the first two are switched.  The move lends a symmetry to the edition which thus begins and ends with the focus on Maqroll, older yet still with a glint in his eye, while the middle two novellas center mostly on Abdul Bashur and his family, with Maqroll never far in the background.

The book opens with Amirbar, and Maqroll is engaged in yet another unlikely venture:  the man of the sea has gone digging for gold in an abandoned mine in the South American jungle.  "Gradually I came to realize that I lived only in the mine, where the walls seep moisture from another world, where the deceptive gleam of the most worthless fragment of mica could carry me to the heights of delirium."  But Maqroll tells the story while recovering from malaria (which he caught in Rangoon), at the narrator's brother's house in Northridge, California.  He begins in classic fashion:  "I spent the strangest days of my life in Amirbar.  In Amirbar I left shreds of my soul and most of the energy that fired my youth."  Amirbar is the word he hears the wind say when it enters the grotto up by the mine; derived from Arabic, it means "General of the Sea" and it lingers both as siren call and warning, till he finally breaks free of the gold fever.

The second novella, The Tramp Steamer's Last Port of Call, is a love story.  The narrator tells of the four times he spotted the Halcyon, an old freighter long past its prime, like an apparition crossing his path in waters from the Baltic to the Caribbean.  Up to there, no love story, just mystery.  Then one day, riding downriver on a tugboat, he meets a fellow passenger---the Basque sea captain who piloted the Halcyon through those years.  The man still bears the traces of the impossible love he lost with the young woman who owned it and first took him on as her partner---Warda Bashur, younger sister of Abdul, seeking her independence in Europe only to return finally to her people in Lebanon.

Abdul Bashur, Dreamer of Ships recounts some eight episodes in the life of Abdul, from his first encounter with the narrator to his death in an airplane crash in Madeira.  Abdul's lifelong dream, never realized, was the "endless search, in every port on earth, for the ideal freighter."  From a family of shipbuilders, descended from Bedouins, Abdul gets tangled in many enterprises with Maqroll, like their investment in the Hellas, a freighter they used to transport pilgrims to Mecca.  On board the ship Abdul is seduced by a young woman, sister-in-law to an old imam who raises a protest, and the woman has to be spirited away accompanied by the boatswain when they stop in Port Saïd; that couple appears years later as the porters of a dingy motel on La Brea Boulevard in LA where the narrator first locates Maqroll with his malaria at the beginning of the book.

The last and longest part of Triptych on Sea And Land finds the Gaviero an old man, more or less settled, getting by as the caretaker of abandoned shipyards in a small port on Mallorca.  The narrator, on word that Maqroll needs to see him, goes to visit there and hears the story of Jamil, whose mother was once Abdul's lover.  She has asked Maqroll to look after the four-year-old boy so that she can go work in Germany, and the old traveler is faced with his most unexpected challenge yet.  In the year that he lives with the boy, whose gestures recall his dear Bashur, he becomes infused with a late burst of youthfulness and a new enthusiasm for the world.  Though he now comes to accept his fate, these changes are difficult to reconcile in him once the boy has departed with his mother again.

The constant layering of textual materials throughout the books---as the narrator and his friends move about along intersecting maps in a world of ports, occasional cities, places of passage between land and water---is as fully diverting as the narrative devices of The Arabian Nights or Don Quijote.  Maqroll is clearly the work of a lifetime, a vast weaving of destinies brimming with the richness of human encounters.  So vivid are the landscapes and characters described, every detail given its just attention, building the spell, that we feel almost as if their world is more real than our own.  Indeed the narrator refers more than once to the books he writes, and to him it is his "unlikely readers" that are difficult to imagine, not Maqroll.