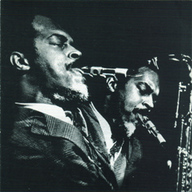 Photos by Sandra Stollman
_
Something Beyond:  Albert Ayler and Cante Jondo


Imbued with the spirit of something beyond, some force wavering in the interstices, Albert Ayler brought forth his own deep song from a well-trod ground.  If the saxophone has often been compared to the voice, seldom did it reach such a universal bent in its expressiveness.  More than steeped in the blues and the church, Ayler’s sound on the tenor saxophone also came from other climes, other ways of hearing the world and responding in turn.

“When the cantaor sings,” says Lorca in speaking of Andalusian musical tradition, “he rouses ancient essences from their sleep, wraps them in his voice, and flings them to the wind.”  So with Ayler, who could not disguise the instinct for a kind of prophecy.  His tunes seemed strangely familiar, haunted by an ineffable beauty; his embellishments were a form of devotion.  Were they not as well a method of healing?  “He has a deeply religious sense of song,” remarks Lorca across an illusory distance.

Like the cantaor once he is launched in full flight, Ayler’s playing revealed a fateful ecstasy, a tremor in the blood that could not be appeased before its term.  His music invoked a timeless tradition of seers and seekers, irrespective of borders, a tradition that had crossed many borders in its wandering.  Or of a soul bent on wandering, yet anchored in its cry and the inexplicable joy that is its home.  To dwell in his music was to emerge transformed.

There is really but a blink in sensibilities between Ayler’s approach and centuries of singers in Andalusia or even, say, the qawwali singers in South Asia.  The earthly and the divine in sweaty proximity; the practitioner with roots that extend back before memory, while in the present---now, in this moment, again---dancing blissfully at the precipice.  Cante jondo, says Lorca, comes “from the first sob and the first kiss,” baring a “resonant tear on the river of the voice.”  Ayler would have recognized himself among family there.