The Rova Saxophone Quartet has been busier than ever, with three releases in 1990 alone.  These mark the first recordings with new member Steve Adams since Andrew Voigt left the group two years ago.  In the spring Rova came out with Electric Rags II (New Albion), a full-length work by Alvin Curran specially commissioned for them as part of their PreEchoes series, premiered in San Francisco in 1989.  The piece is made up of numerous short sections in which Curran alternately plays off of them with his synthesized effects and feeds their playing through live electronics, transforming the horns to sound almost like strings, or doubling them back, weaving sampled ambient sounds and voices through them.  Somehow, with the heightened magnitude of their sound, the work retains a poetic spareness where the music seems almost to be listening to itself, slowly articulating a bright new language.

The piece is so abundant in its possibilities that it was instructive to hear the group perform it at Town Hall in New York, shortly before the record’s release.  The band was in good form, but the insufficient audience was not entirely ready to appreciate such music.  The concert hall had generously offered entry to a number of presumably disadvantaged kids who would not otherwise have been there, so when Rova opened with Steve Lacy’s subtle and tricky “Precipitation Suite,” later followed by the Curran piece, those kids were so unprepared for what they heard that they giggled uncomfortably, calling out, trying to defuse the strangeness with the familiarity of their own voices.   “Electric Rags II,” however, once the group was launched full swing, seemed like a constant unraveling of marvelous fragments that kept people on the edge of their seats.  That version sparkled even more than the recorded performance, only they went on too long with it.  Clearly, it was through the fragments themselves that the piece worked, and on the record they were able to better manipulate its sequence and duration.

Half of Rova’s summer release, Long On Logic (Sound Aspects), features more works from the PreEchoes series, this time by Fred Frith and Henry Kaiser.  These pieces show how fertile the growing repertoire for saxophone quartet can be, with the Frith drawing on various elements of traditional music, while the Kaiser emphasizes elaborate rhythmic studies in a piece dedicated to Conlon Nancarrow, which Kaiser himself originally performed with Sergey Kuryokhin on a record for Rykodisc.  Rova’s own compositions on this record show a healthy and vibrant intuition, their playing alert with an infectious gleam.

The end of the year brings New Albion’s release of music from Rova’s second tour of the Soviet Union, recorded in the fall of 1989 with several Russian musicians as guests.  The tour was longer than their previous visit in 1983, to more cities, and with the new openness it was that much more triumphant. 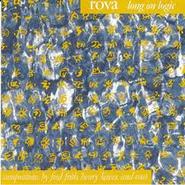 
It matters little what the music is called.  The Rova Saxophone Quartet emerges from that vanishing point where the traces tangle and dissolve, transmuted into a new life.  Rova has been together twelve years now, mostly playing original compositions that draw on a wide range of sources for their ideas.  Its members have developed an instinct for the elasticity of the forms they devise, how the tricky heads and complex rhythms and bright polyphonies frame a context for their daredevil improvisations.  They construct scaffoldings of surprise upon which the music may flourish.

Four years ago, at their home base in the San Francisco Bay area, they initiated a new concert series, PreEchoes, in which performers and composers would collaborate with them on new works commissioned from the guest artists.  This has not only enlarged the repertoire written for that most modern of chamber units, the saxophone quartet, but it has enabled Rova to explore new areas of music with both predecessors and peers.

Fred Frith, the British guitarist, has had a distinguished career as a music provocateur.  From the seminal art-rock band of the 1970s, Henry Cow, to his more recent work in such groups as Skeleton Crew, he has shown himself to be deeply irreverent of musical boundaries, achieving a wild synthesis of widely divergent elements.  In his three pieces for Rova, he manages to remind us that the avant-garde may really be just the flip side of the traditional.  “Long On Logic” shows the most dramatic contrasts of texture.  With its suspenseful tenor intro and its two fiery baritone solos, the piece bears a rich lyrical impulse throughout, from its recurring church-like harmonies to the pointillistic melodies where the group, using the African hocket style, floats the tune note by note around the four horns.

“Hope,” dedicated to Robert Wyatt, highlights the unique styling of Bruce Ackley’s soprano saxophone.  His meditative, inquiring lines skip lithely through the elegiac mood-piece; alone, or anchored by the others’ three-part harmonies, his playing remains drenched in feeling.  “Song and Dance” carries the greatest dose of British folk roots, with its airy, light sound and its flashes of medieval dance music.  The piece has a circular shape, as the soprano, alto, and tenor solos, bounding off the rhythmic foils of the rest, each folds back round to the dance in the end.

California guitarist Henry Kaiser is a longtime collaborator of both Rova and Frith, his improvisations forming a fantastic blend of idioms.  “Sugagaki (for Conlon)” has been recorded twice by Kaiser himself, the last time with Russian pianist Sergey Kuryokhin.  The title is Japanese for ‘rhythm study,’ which Conlon Nancarrow called his many pieces for player piano.   Dealing with energy and rhythmic complexity, “Sugagaki” approaches the amazing dexterity of Nancarrow’s pieces with its bold layering of melodic patterns.  It’s a wonder the quartet holds on so well, but then they are used to such challenges in their own compositions.

“The Shopper” is largely a game of double duos, in which each soloist grabs ideas from the other, tries them on, and moves on to the next, all while navigating over various pivot cues and repeating riffs.  The order of the brief solos off of the head is Adams, Raskin, Ochs, and Ackley; this leads into the sequence of shifting duos, and then to the quartet improvisation which concerns “the continuous phasing of two rhythmic events.”  As one of the final points in his improvising instructions, Larry Ochs writes:  “Just remember to shop as if it’s the final sale.”

Altoist Steve Adams joined Rova in 1988; this marks his first appearance on record with the quartet alone.  “K/24” was how Wassily Kandinsky signed the particular painting that inspired the piece, which is dedicated to him.  Adams’s composition suggests how music can sculpt space, shaping densities, laying an edge, lending color and shading; in short, how a picture might be heard.   Tensions and convergences build, until suddenly they meld at last into a pastoral weaving of soft sustained tones.

Jon Raskin’s “Wig Hat Six Step” gets into a wiggly, syncopated groove right off.  The title derives from a line by the poet Clark Coolidge and the polyrhythmic motifs recall the jubilance of recent African pop music, laying the ground for solos by Adams, Ochs, and Raskin.  Like Rova’s most infectious tunes, this piece revels in a perfectly balanced momentum, stepping niftily along a high wire.

In “torque,” dedicated to Roscoe Mitchell, the ‘comprovisation’ is made up of trios and unaccompanied solos, cued by whichever player is currently laying out.  Once past the difficult head, and its attendant lyric contrasts, the piece moves into a quick juxtaposition of ideas bent along by the pull of new elements.  The main section follows a process of ‘additive improvising,’ where three simultaneous solos are at work rather than a single trio.  This gives way to the last head and its closing cascades.

Music, supposedly the most abstract of the arts, may also be the most adaptable, rapidly changing according to what we know.  But if we try to define it too soon, it will only escape us.  The musicians of Rova move intuitively through an open terrain, for theirs is the discovery of what follows.