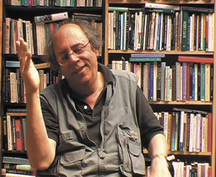 
In the camera obscura of a Richard Foreman text, deep mysteries abound.  First among these mysteries is language, its capacity to spin out ever new meanings, new answers to the old questions.  Language constantly surprises in Foreman, takes unexpected routes, often turning slapstick even as it searches kabbalistically after hidden truths.

What is clear is that the language shifts about at a prodigious rate.  The reader almost cannot blink:

Samuel turned the pages of his memory book.  What slid to the floor out of the pages was a map in sugar.  I wish         I'd had this on my trip, his tongue licked.  Then he made a mental itinerary, backward, and his chair collapsed.          Why would such a thing happen?  Glue no longer held.  But fortunately---habit was stronger than glue.

Foreman himself states in Unbalancing Acts (1992) that he writes "a drama of impulses rather than actions," and his style of staging his plays "is a way of representing originative impulse before it is tamed by social constraints, including the constraint of easily understood language."  It is the impulse "that is your deep truth, not the object that seems to call it forth."  Working at this level, much as in Nathalie Sarraute with her tropisms, the conventions of narrative coherence and psychological characters quickly lose significance.

For Foreman the writing focuses instead as a flow of voices, a multiple intertwined perspective, "a nonending river of talk."   It became his practice not to assign characters to the lines he wrote until the actors were in rehearsal.  Thus, characters as much as stage directions were a method of punctuating the material he'd amassed---the "notes, thoughts, dialogue, fragmentary observations."

Along the way, though, certain characters he developed---Eddie, the Mind King---began to generate far more material than he used for the plays.  They were demanding another form.  So it is no surprise that the same two personae open both his latest book of plays, My Head Was A Sledgehammer (1995), and his "novel in parts," No-Body.  The prose work is made up of six parts or characters that have no apparent causal relationship and barely overlap; in each chapter very little seems to happen.  All parts share the same flat narrative tone, and the same recurring female figures, perennial interlocutors:  Marie, Helen, Estelle.  As if to signal its departure as writing, the novel takes its start from the closing pages of the play Eddie Goes To Poetry City, the lines laid out like a simple narrative sequence:

Eddie went to Poetry City and there, on one of the major boulevards, he met Marie.
Marie! Marie! he cried.  I didn't expect to find you in Poetry City.
Don't be a fool, Marie frowned.  I only come here to get gas. . . .

The play anticipated the transition of such lines in that they were delivered by a taped narrative voice, the Deep Voice Over Loudspeakers.  Throughout the novel's first chapter, "Eddie," numerous passages from the play reappear in different order, rising into view like parts of a dream, familiar yet still strange.  The novel begins, therefore, by way of a ghost effect with the further adventures of Eddie; indeed, as a means of getting under way many sections repeat the first line, beginning ever again, "Eddie went to Poetry City. . . . "---sketching a narrative that consistently fails to materialize beyond a small number of gestures, mental speculations, and dialogues, in themselves miraculous enough.  "He cracked his head on the sidewalk, trying to express something by taking a sudden, demonstrative plunge."  Or:  "Poems exited from all parts of his body.  And in leaving, they turned to nothing."  Soon, like radio interference, the prose gives way to stretches of poetry that seem at best obliquely connected, moving in quick associative leaps.  Foreman's prose is slippery enough to apprehend; his poetry is more indomitable still, given to dense phrasal clusters that bend syntax and fuse new terms.  As he writes:  "Poetry melts language, doesn't it?"

The poetry sections taper off well before the middle of the book, but in this first chapter they hold like a counterweight against another gravitational pull:  the residual force of his perspective as a playwright.  The novel is not entirely convinced it is a novel yet; there is a sense impression of staging, as though a memory adhered to the borrowed or reused passages from the play.  Eddie not only escapes to Poetry City, he steps free of the stage.  Curiously, it is only through the more fluid realm of prose, like a gateway, that we glimpse the energy field of poetry that Eddie periodically enters:

A plate receives messages.
A window retransparents,
And my eye
Solid
Builds.

The second chapter, "The Mind King," follows the play of the same name far less, seldom touching down on the original lines. The quest---all of Foreman's characters are embarked on a quest, for the ineffable word, the hidden city---is here internalized by power of mind; external landscape is continuously internalized for the Mind King's endless ranging.  And the metaphysical questioning that in the play was spoken by the Angel is in the fiction wound directly into the narrative voice.  As if, with this chapter, the continent of fiction really starts to break away for Foreman.

Right off, the narrative launches into an astounding metaphorical web that turns streets into living rooms by a process of imagination, which itself raises a physical reflection that instantly splits:  "That gray, webbed matter that rolled on itself like coils of some intestinal machine---two coils . . . one for material food and one for mental food."  Before long, he returns to the image he was building, opens it further.  "But wait a minute---look at these streets themselves, coiling in directions that echo each other and circle something no longer there.  What digestive system herein operates?"

The Mind King seeks to transcend his disguises, to "reform his language," and persists in questioning the substantiality of narrative, himself, and the world around him.  In this he is not unlike the other characters in the novel:  the Amateur Genius, the Suburbanite, the Hero Cadmus, and finally Samuel.  They are all like a series of masks for the author, a process of masks, and he does not hesitate to gently mock himself by way of them.  Each chapter seems to open the narrative prospects a little further, to work the connective (or disconnective) leaps a little differently.

Though it may not seem so, by the last chapter the novel insists that "a story is being told."  Surely many stories are being told---glimmerings of stories, speculative flashes, runaway voices---spliced together in such a way as to keep the reader often amused, always off-balance, and sometimes, frankly, lost.  Even so, we suspect that through some sleight of hand, some resonance of internal gestures, there is an underlying coherence just beyond our grasp.

Despite the circularities of the book, the "Samuel" chapter does bring the novel onto another level and to some tenuous metaphysical resolve in place of closure.  There is a more sustained engagement with narrative.  Also, Samuel as character seems to enter the world more, and occasionally, to experience emotions.  Like the other personae, he chases the tail of language and he too seeks the keys to the invisible city.  But Samuel manages to get there:  fleetingly the elusive word is glimpsed, and again and again he enters the city.  "So words, they made things in spite of the effort being denied to the making."  He sees that he can only surrender to language, to the ecstatic gap between words and self, or else go silent, and even then he is lost.  "So the tongue---dethroned.  So the language, demounted and secret, speeding through the streets . . ."  In his struggle, he becomes like a hero out of Beckett:  "Samuel was a writer who had nothing to say.  That was his strength."  In the end, he leans toward silence, yet also to the babble of words which may well be his way to know the silence.  "So silence and babble, so both, so linked, so opposed and coordinated . . . laid forth blanketlike under the light, always the light reshowing itself outside which was only a way, finally, of being inside."

In the context of Foreman's oeuvre, his thirty-plus years of writing and directing plays, the event of the novel lies of course in that it is not a play.  Even with a director of Foreman's imaginative gifts, it could not be staged, not really.  Writing prose fiction compelled him to accept the page in a way, to internalize the different perceptual levels that he likes to keep in play in the theater work.  In the six plays from the 1990s that comprise My Head Was A Sledgehammer, it seems the writing incessantly unfolds, gains dimensions, by means of external features---his rhythmic use of sound, props, interruptions, strange gestures and rituals, as well as the way he chooses to score the voices.  To read the novel, it is almost indispensable to read at least this book of his plays, to more fully understand his approach to writing.  Moreover, like a skeleton key of sorts, the volume presents two versions of the title play:  the first with stage directions and characters, the second as just the bare lines spoken, the original text, "an open field poem," as he describes it.  Comparing the versions prepares us for the prose in No-Body:  we see how a page quickly grows animated in Foreman.