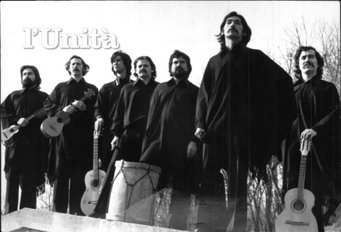 Quilapayún: The Music of an Endangered Culture


The slow beat of the bombo drum.  A single plaintive voice rising, gliding like the wind, joined in an exquisite seven-part choral harmony.  Quilapayún, the Chilean ensemble living here in exile since 1973, fills the theater with the passionate music of an endangered culture.

Facing the audience in black ponchos, the seven musicians launch into another ebullient and original song in Spanish (the songs are introduced in French with a sharp, poetic wit).  For each piece, the musicians regroup, choosing among a variety of traditional Andean instruments, such as the mandolin-like charango with its armadillo-shell back, or the quena, a notched bamboo flute.

The music covers a whole spectrum of Latin American styles, from Cuban rhythms to a Colombian waltz on six zamponas (panpipes), to an Argentine tango.  Most of the songs are original compositions and the arrangements are sophisiticated.  But Quilapayún’s style incorporates “a sense of what is popular,” says Rodolfo Parada, a member of the group.  “The public is in you when you are creating something.”  The audience demands three encores.

An Araucano word (from one of Chile’s Indian languages), Quilapayún means “three bearded ones,” a tribute to the Cuban revolutionaries of 1959.  Its songs reflect the basic music and subjects of Chilean folk culture—but with political lyrics in a popular format.

“He was an example,” says Parada, “of how to develop the poetical creation, taking care of the form of the art, while at the same time maintaining this commitment with the whole reality of Latin America and Chile.”

There was a mother too, the popular Chilean singer and songwriter Violeta Parra, “in the sense that she was the first to integrate this [commitment] in popular song, because she had started to recover the folk music.  She did musical research, and that was her point of departure,” Parada explains.

In 1966 Quilapayún started touring Chile, playing “in the copper mines . . . in the countryside, at trade unions and factories in Santiago, for the students in big demonstrations.”  Until 1969, the late singer and theater director Victor Jara was the musical director of the group and the musicians were named “cultural ambassadors” of Salvadotr Allende’s Popular Unity government.  They began touring abroad.

When the military coup occurred in 1973, Quilapayún was in France for the fourth time.  The group and its records were immediately outlawed in Chile.  Jara, who stayed behind, was rounded up with thousands of others at Santiago’s National Stadium.  His wrists were broken so he could no longer play the guitar and he was strung up as an example.  When he persisted in singing, inspiring others to join in, he was taken and fatally shot.

Since the coup, Quilapayún has been giving benefit concerts around the world: in the United States with Jane Fonda and Jon Voight, in Paris with Jean-Louis Barrault and Mikis Theodorakis, in London with Pete Seeger.  “Now that we are abroad,” says Parada, “we are forced to establish a dialogue with all this international public . . . we are Chile now, not only Chileans forced to create in exile.”