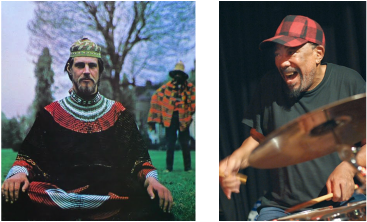 Louis Moholo-Moholo/Marilyn Crispell, Sibanye (We Are One)
Zurich:  Intakt, 2008


In three decades as a bandleader, South African pianist Chris McGregor left a spotty history of recording sessions.  Reissues of the original releases have been sporadic since his death in 1990, yet lately his music has become more available than ever.  In recent years, Cuneiform has issued several previously-unreleased performances by the first edition of McGregor’s monumental Brotherhood of Breath, from the early ‘70s, and just in the past six months Fledg’ling has unleashed three important London sessions produced by Joe Boyd in the period immediately preceding the formation of the Brotherhood.  Because the focus soon turned toward McGregor’s big band, Our Prayer and the septet date Up to Earth, both from 1969, never were released in their time.  For McGregor and his fellow members of the Blue Notes, who had all emigrated from South Africa in mid-decade, the late ‘60s was a fertile and frustrating interval as they sought out new possibilities after the group disbanded.  Our Prayer, with Blue Notes drummer Louis Moholo (he adopted the double family name many years later) and American bassist Barre Phillips, was McGregor’s only session leading a trio; it affords him wide latitude while also laying down essential elements toward carving a space for larger ensembles.  Here the bass is often cast into a front line role, as in the opening “Church Mouse” where it trades back and forth with the piano to maintain a muscular vamp, indicative of the church-inspired melodies that both grounded and propelled so many Brotherhood tunes.  On “Moonlight Aloe,” McGregor begins by sketching out voicings that might well be filled out by a horn section, only to give way to a free extended solo that makes full use of the loose framing offered by his collaborators.  Increasingly, the musicians give rein to a collective interplay reflecting all they’ve learned from free improvisors throughout the decade, culminating in the title piece, which comprises more than half the record.  Moholo’s perpetually alert, nuanced, rhythmic textures help guide the others through every unexpected contour of density and delicacy along the way, reminding the attentive listener that while free playing may have been a dead end for some, it proved a fount of resourcefulness for those who have known how to drink its waters.
Sibanye, recorded nearly forty years later in Baltimore, poses a challenge by comparison:  is there any way to qualify possible changes in Moholo-Moholo’s playing over such a time span?  Not easily.  But it does seem as if he has gained a greater precision in his attack, a greater command of rhythmic colors, a more fluid capacity for polyrhythmic subtleties.  On his first meeting with pianist Marilyn Crispell, this has all served him well, for Crispell herself has shown a remarkable development in recent years, from the energy playing that dominated her earlier work to the tenderness of touch most notable in her ECM releases.  This concert swings between those two poles, as it were.  They initiate the encounter in the tone of a free improvisors’ summit (“Improvise, Don’t Compromise”), which establishes a sort of core language that they draw on throughout, but particularly in the elegiac “Journey” and “Phendula (Reply)” they also achieve an evocative lyrical power.  Most often, the two modes of exchange alternate, but in “Sibanye,” concluding the evening, Moholo-Moholo and Crispell manage to synthesize these approaches, sculpting passages full of space that sketch out gestures of melody like so many quick bursts of flame.