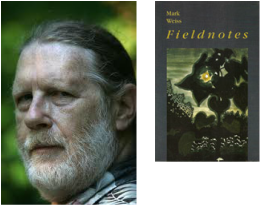 
In “Artifacts: 40 Poems,” the major portion of this book, the ground is never steady.  There is the sense at every moment that the poet’s attention may turn, to incorporate the unexpected detail, the wayward reflection, and thus transform our reading of the whole.  By drawing on a variety of poetic techniques, Weiss grants none sovereignty:  discernible in the mix are an Objectivist-like precision for registering the external world, a receptivity to chance events, occasional intimate confessions, nuanced repetitions, even snippets of nature poetry.  Rather, these are works of assemblage, of delicate tensions and juxtapositions, the disparate parts ringing sympathetically.

To consider the poems as artifacts implies a process of discovery, unearthing not only manmade objects but hidden connections—less to the past, in this case, than between self and world as negotiated through language.  The rhythm of the interval rules here, the possibility that the poem may find new openings with each breath, as in the first part of “XI”: “To become transparent. // A hand becomes a slap. // But the lamb is dead regardless.”  This progression is echoed in the third part of that poem by a more subjective instance: “On the subway / soft breast against my chest. / Look bored so as not to frighten her.”  These openings, Weiss suggests, are all about us but they must be approached with care, for an excess of purpose may easily blind us to them.  In “III” he indicates a method of sorts, not for where to go but for how to proceed:

Reach out     to the detail
so as not to get lost.  So,
maps on the table-cloth.
This place, too,
could be a juncture.

It is the junctures he seeks with these poems, that space in which the wonder occurs, the small or large shifts in perspective.  He is less interested in completion, in arriving at a crystallization of meaning, and will counter such a tendency by reaching far outside, often with a subversive humor.  The end of a poem, therefore, serves as another point of departure, though it may also leave the reader perplexed.  Here is “IX” in full:

Just before spring
and the ghosts of trees on the Palisades.

Driving across the shadows of bare branches.

Through the shadows of bare branches.

All these things that should never have happened.

“Charlotte is the mother because,
she tells the others, she is wearing the silver shoes.”

Fieldnotes is Weiss’s first book of poems in nineteen years.  Where the ‘artifacts’ are spare and composed, the two long poems that precede them sprawl with an impassioned notetaking, as so many fragments arranged in a series.  Yet both sorts of writing share a comparable array of techniques, including their use of intervals.  The long poems place more emphasis on movement through space and on the quality of witness—“Solo,” on one level, is about a solo journey by car cross-country—but alongside the ‘artifacts’ they suggest that these two ways of envisioning the poem spring from the same gestures.

N.B.  Mark Weiss co-edited Across the Line / Al otro lado: The Poetry of Baja California (2002), reviewed here, and also edited The Whole Island: Six Decades of Cuban Poetry (2009), selections from which can be found here.