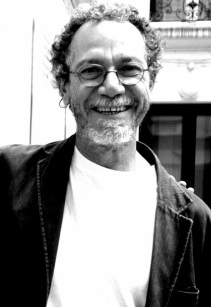 
A native of Barranquilla, Colombia, Julio Olaciregui (b. 1951) has lived in Paris since the late 1970s.  He has published five books of fiction, most recently the remarkable flood of a dream novel that is Dionea (Bogotá: Kimpres, 2005), and his stories have appeared in numerous anthologies, both in Colombia and France.  He has written plays, poetry, and a lot of journalism, and was also co-writer of the film La mansión de Araucaima (1986), based on a story by Álvaro Mutis.  The Paris-based Latin American journal Vericuetos devoted a special issue to his work in 2009.
The following interview took place at his home in Paris, on July 18, 1997.


You’ve been working for years at the Agence France Presse, in the Spanish language bureau, where you also do interviews and write cultural articles.  Are you still writing for Colombia as well?

I write for Colombian papers, but not often.  In the beginning, I wrote more for Colombia, because I was more connected to all that in my first years here, but now I don’t need to as much.

Have you found new areas of interest since you’ve been living in Paris?

In the last few years, I’ve gotten involved with African dance.  I know people in Guinea, Mali, Senegal, the Congo.  That’s from searching for roots on the coast of Colombia.  Because on the coast there is a lot of African influence that I learned to recognize, including in dance movements and choreography.  All that has affected my life in recent years, by way of dance.  In my work as a writer, not long ago I wrote a play connected to that, set in the seventeenth century in Cartagena.  It was the result of research I did, reading books—what happened is that I read a thesis by a woman historian from Cali.  There was a figure, a woman, who was mixed up in witchcraft.  She was very beautiful and she confronted the Inquisition.  I understood that what they were calling witchcraft, since they were persecuting her as a witch, is that she was a curandera, a healer, a person who healed others through the use of plants.  And of course the Church did not allow that.  She was the daughter of blacks brought from Africa, she was born on the island of Santo Domingo.  Her education was in a convent, and she learned to heal, she had several children, including with a monk.  I wrote my play about that woman.

And you discovered all that living here.

In the last few years, yes.  I never thought about that when I was in Colombia.  Of course, when I arrived here at the age of 27, I took courses at the university and studied literature.  I did a master’s in comparative literature on Álvaro Mutis.

You came to Paris in the late 1970s and your first book, Vestido de bestia (1980; Dressed like a Beast), was published not long after, is that right?

Yes, it came out when I had already been here for some months, because I wrote it in Bogotá before leaving.  I remember that I had read two books that resembled each other a lot in their form—one by Cabrera Infante, View of Dawn in the Tropics, is made up of short texts, and the other by Baudelaire, Paris Spleen, which is also prose poems.  Those two books allowed me to realize that one could write a book without it having to be like One Hundred Years of Solitude or The Green House, big thick tomes.  Later, after I arrived here, several years passed before I could put together Los domingos de Charito (1986).  I wanted to do a more classic novel, but okay it wasn’t that either.  And Trapos al sol (1991; Rags in the Sun) even less so.  Little by little I’ve realized that actually I like poetry, and that I can write a story, poetry, or a play, as I please.  That is, one doesn’t have to be obsessed with writing a novel.

Were you thinking of Trapos al sol simply as a book of stories?

The stories are interwoven, it’s sort of a false diary.  There are pieces of stories that are more organized than others, and inside of that are fragments, like a puzzle.  For a number of years, in fact, I didn’t have a conception where I’d say, I’m going to write a book exactly like this.  At any rate, a person learns to work, one doesn’t know how to organize, how to see, rather you go along discovering these things.  That book was rather a literary investigation into how certain characters get by.  Every day I was writing pieces and fragments, and then at a particular moment I began to work on some fragments further.  That book is written from back to front, because the first large fragment in the book was the last that I wrote; and the last was the first.  So, I began to find possible ways to organize it, and then I kept finding sort of a secret order . . .  I also wrote a book of stories in a more traditional style, La suegra de Adán y otras historias de familia (1998; Adam’s Mother-in-Law and Other Family Stories).  In Barranquilla, the buses, which are run by private transportation companies, are painted in bright colors and sometimes they carry an inscription below the windshield, and I remember one that said, “Lucky Adam who had no mother-in-law.”  So it’s a story that is half symbolic, erotic, strange, about the absence of Eve’s mother in the Bible, because if it’s all a question of man and then later woman comes out . . .

You’re from Barranquilla.  But did you also have the experience of the country?

And where did your desire to write come from?

In high school, I discovered that it was possible to write when I was studying there in Barranquilla.  It was when I was sixteen years old, and coincided with the publication of One Hundred Years of Solitude.  I began to become aware when I read that book, thanks too to a teacher I had in my junior year.  But the fact that I had discovered theater and literature didn’t keep me, on finishing high school, from getting the idea that I had to do technical studies or something in order to earn a living.  Because in Barranquilla where I came from, my family and all, it wasn’t very literary.  I didn’t have anyone apart from that teacher who could tell me about such matters.  So, I enrolled in the study of industrial engineering in Medellín, and I lasted about two and a half years, but I also got involved with a theater group.  Clearly I had started to go astray . . .  Then I returned to Barranquilla, but I was already reading a lot in that period, especially writers of the Boom.  And there I got a job at the Heraldo working as a journalist.  That’s how I started, a bit like the mythology of the writer who works at a newspaper, besides García Márquez had worked at the Heraldo.

How did French culture enter your world?  Did the tradition of Paris play a role?

It did a bit, yes, because I started to study French there in Barranquilla.  But I didn’t have the slightest idea that I was going to come to Paris one day.  Then in Bogotá, I went to work at the Espectador, and I kept studying French.  Later there, I met the woman who became my wife, she was a French teacher.  So I was already learning about French literature.  And I started to live that myth of Paris as well, but it was really more the desire to leave that crazy world of Colombia, and to come to literature’s past, because France represented the land of letters.  It wasn’t easy for me to come here, I came with a three-month visa.  I didn’t come with any plan, like that I would stay for over fifteen years as I did, nor that I would have a daughter, or anything.  I came for the adventure.

The first years here, how did your friendships develop?  Did you mostly stick around with Colombians and Latin Americans?  How did it go?

I was fairly isolated.  Of course I was married, but my wife wasn’t connected to any cultural circles either.  I didn’t know hardly anyone, and in fact that helped me because I dedicated myself to studying.  So, I was reading and writing.  I met a few people, writers like Hector Bianciotti, I remember, because he had just published Le Traité des saisons in Spanish and it had won a prize, so I wrote him a letter asking to do an interview.  But what interested me was to read in French Zola, Balzac, Flaubert, also Nerval, Baudelaire—I was happy being able to read all those books in French—Céline, Proust . . .  I did have a few friends, Colombians who were around.  But what impressed me was all the films that were available, and the art exhibits, I took in all that richness, including television, all that helped me a lot during those years, it nourished me.  On the other hand, at the university, it was like a silence, people didn’t talk to each other much, it wasn’t like the university in Colombia where people become friends . . .

What has been your relationship with Colombia since you’ve been living here?  Have you returned much?

I’ve gone a number of times.  At any rate, it’s rather ambiguous because one is far away—well, it’s not so far now because one takes a plane and arrives in ten hours—but, as for being considered a Colombian writer, in Colombia there is that tendency to forget a person once they’re gone, as if they don’t exist.  It’s a game there of separation and forgetting, but yes I do have some relationship with Colombia.  Some people have heard of me or of some book I published but that they haven’t read—that is, I exist and don’t exist as a writer.

Has your language as a writer changed much in these years?

I’ve realized that I have retained a certain language through writing, which comes from my years in Colombia, in Barranquilla—various terms and phrases that were only heard there.  I’ve written two plays:  the first is about the legend of the alligator man (hombre caimán), which exists there, a man who transforms into an alligator in order to see a woman naked.  There are songs, and it’s connected to carnival too.  I wrote it as if it were Goethe’s Faust—the character has a problem with a sorcerer there.  So, I sent that play to Barranquilla.  Someone told me in a letter:  I felt a great nostalgia for Barranquilla, because reading that play I found things that don’t exist there anymore.  Not even that street, the name’s changed.  Of course, for that person reading the play, it was like going back in time twenty years . . .  Nostalgia nourishes a person.  But once I was speaking with García Márquez, he said:  “Why don’t you go back to Colombia?”  I told him, “No, I have a family now” and such.  He said, “The problem when a person lives abroad is that a moment comes when you’re not from here or there either.”  And it’s kind of true in my case, because I came here in ‘79, that makes eighteen years now I’ve been living here, and sometimes I write in French but I haven’t published anything.  But I do intend to write in French.