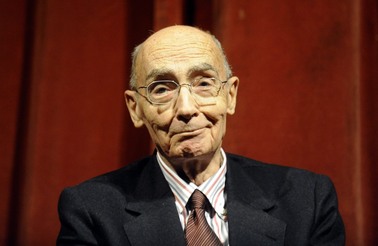 
José Saramago specializes in bold moves.  In The Stone Raft (1986), the grand Portuguese fabulist wrenched the Iberian peninsula from its moorings; in Blindness (1995), he rendered an entire population sightless.  A spry demiurge, indeed.  Now well past eighty, with his latest novel—in a pitch-perfect translation by Margaret Jull Costa—he challenges mortality itself while playfully subverting a timeworn theme.

On the first day of the new year, in an unnamed land, death takes a holiday.  Initially, this strange circumstance calls for celebration.  Before long, however, the implications of life eternal become evident, and the blessing begins to resemble a curse.  People continue to age and deteriorate, their end simply prolonged.  Church authorities fret that the final resurrection is made meaningless, and therefore their doctrine is, too; undertakers are thrown out of work; hospitals and convalescent homes will soon be paralyzed; and the life-insurance industry must devise a wily strategy to compensate for its loss of purpose.  Families saddled with their dying-but-never-expiring relations make nocturnal journeys to the border, since death remains operative abroad.  Facing the threat of popular revolt against the constitutional monarchy, the prime minister warns the king:  “If we don’t start dying again, we have no future.”

To evoke this vast upheaval Saramago offers a panoramic view of events, the various institutions of church and state and commerce each acting to protect their interests; as a countervailing force, an underground economy thrives in which smugglers spirit the terminally ill across the border, thus restoring some measure of the old order.  Characters serve their function and then exit the story—during the initial round of celebration, one woman hangs the national flag from her balcony and her gesture becomes an obligatory display of patriotic fervor; we never hear from her again.  The calamity builds in its dire complications, even as the narrator takes time to assess the philosophical debate about death’s nature:  “Have you ever wondered if death is the same for all living beings, be they animals, human beings included, or plants,” only to conclude that “there are many deaths, as many as all the living beings that have existed . . . and will exist.”  And just when his tale gives signs of running out of steam, not halfway through the book, the novel takes a sharp turn with the mysterious arrival of a letter from death herself announcing that her little experiment, with its deplorable results, will end at midnight.

The person of death with a small d becomes the first in-depth character.  But instead of an aristocrat or an awesome figure, she reveals herself to be a lonely bumbler, publicly acknowledging her mistake.  A weary skeleton wrapped in a sheet, she inhabits a chilly room with a chair and desk, her rusty scythe, and a few dozen file cabinets.  To make up for the cruel way she formerly took lives by stealth, she begins sending warning letters, one week in advance.  Yet here again she makes a mess of it, inciting panic with her innovation, as people squander their remaining days or seek solace in debauchery.  When one letter keeps getting returned to her, she realizes that a certain cellist has somehow eluded her.

The situation, remarks the narrator, is “an unprecedented scandal:  someone who should have been dead two days ago was still alive.  And that wasn’t the worst of it.  The wretched cellist, who, ever since his birth, had been marked out to die a young man of only forty-nine summers, had just brazenly entered his fiftieth year, thus bringing into disrepute destiny, fate, fortune, the horoscope, luck and all the other powers that devote themselves . . . to thwarting our very human desire to live.”

The man lives alone with his dog and his music, oblivious to death’s attentions.  Constrained by the regulations of her office, she does not know how to kill him.  She even visits while he sleeps, but watching the domestic bond of man and beast makes plain her personal failure.  She feels left out of such comforts, as well as the implicit raptures of Bach’s sixth cello suite, whose score lies open on the music stand.  Determined to achieve her goal, she takes human shape as a woman to get close enough to claim him.

They begin a curious kind of courtship, in which flirtation mixes with dark foreboding.  Saramago’s narrators tend to assume the role of puppeteer, often pulling back the curtain for readers to ponder the elements at play.  In this novel, that distancing makes it difficult to guess where the cellist’s growing desire will lead him:  attraction, obsession, self-immolation.  Death may have the power to dispatch him, and yet she wavers.  The couple fall in love, of course, but the culmination of their romance yields far more than a happy ending.

Through her mistakes and her new vulnerability, death finds escape from her eternal drudgery, while the cellist, amid the pleasant routine of home and orchestra, finds new reserves of feeling; both manage to vanquish their isolation.  Recalling other characters in Saramago’s fiction, the two protagonists are like clerks in a bureaucracy who seek to break out of an anonymous existence.  In Death with Interruptions, Saramago again suggests that love can provide the way out, and the will to act.  He refreshes the old trope of immortality by treating it as fertile ground for playing out his incisive variations, exploring not only our fear of death but our fear of life as well.