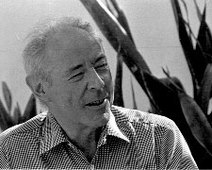 
When he was a young graduate student and lecturer, Gregory Rabassa used to go to hear Charlie Parker play at jazz clubs in New York and would talk with him at parties.  Rabassa was working toward a Ph.D. in Spanish and Portuguese at Columbia University.  By the time he left Columbia in 1968, after teaching there for more than 20 years, Rabassa, with his ear for the secret bridges between languages, was fast becoming what he is known as today:  the preeminent translator of the new Latin American fiction.

His first full-length translation, of Julio Cortázar’s novel Hopscotch, won him a National Book Award for Translation in 1967.  Still, it was not until his translation of Gabriel García Márquez’s monumental One Hundred Years of Solitude in 1970, that Rabassa and the vibrant worlds of the new writers became known to general English-language audiences.  In 1977, he won a PEN American Center Translation Prize for another García Márquez novel, The Autumn of the Patriarch.

“Everything in my life has always been very serendipitous,” Rabassa admits.  Now 60, he never intended to be a professional literary translator.  In 1960, the Odyssey Review, based at Columbia, asked him for advice on Latin American writers for a special issue, and soon he was also translating for it.  When the magazine appeared, an editor at Pantheon asked him to do the Cortázar book.

Rabassa’s career coincides neatly with what critics and journalists call the boom in Latin American literature.  He has translated the major novels of most of the boom’s leading figures, including The Green House and Conversation in the Cathedral by the Peruvian Mario Vargas Llosa, García Márquez’s books, and the late Nobel Prize-winning Guatemalan, Miguel Angel Asturias.

English translations and the internationalization of the new Latin American writers “made them respectable,” says Rabassa, although he insists that their work certainly stands on its own.  “The boom was a sign of cultural maturity in Latin America.

“They went back to the original novel, which was invented in Spain by Cervantes.  But then the English, at the same time they were taking Jamaica and Gibraltar, they also stole the novel.  They took it back to England and the Spaniards never followed up on Cervantes.  The novel that they had was all distilled in England and France, and slowly trickled back into Spain in the 19th century, but it wasn’t the Spanish novel anymore.

“So these writers came back and started at second base, from Cervantes.  Because if you look at Cervantes again, read him in the context of the boom, the new novel, it’s amazing the things he does that we think are very innovative among them.  For example, the business of sticking the reader into the story the way Borges and Cortázar do, Cervantes did it.”

Since 1968, Rabassa has been professor of Romance languages and comparative literature at Queens College of the City University of New York.  “All these years I’ve been teaching Great Books courses,” he says, “so I’m used to a very broad chunk of books, Gilgamesh to Joyce and everything in between.”  On occasion he includes some of the books he has translated, which “does make it easier,” and about every other year he also does a translation course.

“In my day, when you studied a language, by God you translated it.  And I’m wondering whether we should bring that back a little.  Not just for learning that language, but your own language.  It helps with the writing, and then you can see the difference between the two languages.

“I think you also learn a language, like athletics in a sense, in that you absorb it.  So that you’re not conscious you’re learning it, but you know how to use it next time around.”

He appreciates differences; it was his early travels, particularly to Mexico and Brazil, that “nailed down” his languages.  Put another way, he’ll talk music anytime, for Rabassa is both a writer and a listener, an improviser.

In translating, says Rabassa, “I think it’s good to know how to write.  You’re not stuck with dreaming up a plot, characters, a theme, but you certainly can write.  If you’re given all these things, then you can put them into words.”  But he remains critical of most poetry translators, in that “they try to write too much.  I mean, poets, they can’t help themselves.”

Rabassa has said that the most celebrated book he did, One Hundred Years of Solitude, was perhaps the easiest he has translated, and García Márquez himself has said he prefers the translation to the original.

“There’s something there that ought to be investigated,” Rabassa remarks.  “That a very good book in its own language goes over more easily into another language than a book that’s not so good.  Part of the quality of the well written book is that it’s easy to translate.”

As for author’s suggestions, Rabassa finds that “the most helpful is Julio [Cortázar], who is a translator, so he knows the problems.  His English is very good.  But he’s one who will not only answer queries, he’ll find the weak spots in the text, he’ll find mistakes.  I enjoy seeing what the critics say, because this is a text that has been approved.  Sometimes Julio will change things, he actually will go away from accuracy.  Because he’s the author, he can do it.  He’ll change this phrase, because it didn’t work.”

Rabassa’s methods are simple:  book, dictionary, paper.  “I don’t even have an electric typewriter,” he says.  “On the east end of Long Island, we have thunderstorms and I don’t want to be tongue-tied.”  He usually knows how long a book will take him to translate, and only outside circumstances detain him.

“Or else, it’s time to plant the garden.  I’ve got to put some more beans in,” he says, scorning the recent rains.

Rabassa also has been working on a novel of his own for the last 15 years.  “I’ve just collected snippets, really a file.  I’m hoping someday it will blossom and take shape.  I have a title, ‘The Stool Pigeon,’ with the double meaning.”

But mostly he is translating more books.  “Right now I’m working on a Chilean novel that is being commissioned by the author’s son and a Chilean painter, and it’s very good.  The author is Volodia Teitelboim, a native-born Chilean, who was in Allende’s cabinet.  This is a wild surrealist novel of the coup.”

In tandem he is working on Luisa Valenzuela’s latest book and also on an anthology of the writings of Padre Antônio Vieira, a 17th-century Portuguese-Brazilian missionary and preacher.  Rabassa received a fellowship from the National Endowment for the Humanities to do the latter work.

Rabassa checks his watch:  time for a year-end graduate meeting.  “I’m a New Englander,” he says in passing, threatening to get thick with the accent, telling jokes.  “New Englanders always like to see the other side of things.  That’s important for a translator.”